Learn to smell underwater with the star-nosed mole

Sniffing brings molecules in the air around us into our nose, where they are detected and manifested in our brains as smells. But try the same trick underwater and you would rapidly choke or drown. Nonetheless, smell is a tremendously important sense for most mammals and at least two species have found a way to safely sniff in water.

The star-nosed mole (Condylura cristata) is one of them and it has one of nature's most unusual noses. Its snout ends in a ring of 22 fleshy tentacles that are loaded with touch sensors. With this nasal star, the mole rapidly touches and assesses its world, searching for worms to eat. The mole is not limited to underground tunnels, but it's also a capable swimmer and will forage for food in lakes and streams. There, it uses its nose in a different way.

Kenneth Catania from Vanderbilt University, Tennessee, took high-speed video recordings of a swimming mole. As it hunted, the animal continuously blew bubbles from its nose, which it quickly re-inhaled. Catania believed that this technique was a form of underwater sniffing, allowing the mole to detect air-borne odours while submerged. 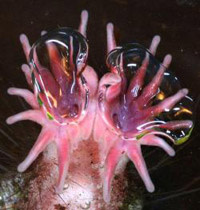 To test his idea, he trained moles to follow an underwater scent trail that led to food. He covered the trails in a steel grid so that the bubbles could pass through but the mole's sensitive nose could not. Sure enough, the moles homed in on their worm and fish prey with at least 85% accuracy. When Catania used a finer grid that blocked the bubble too, the mole's accuracy dipped to chance levels of 50%.

Catania found that the water shrew, a similar aquatic insect-hunter, uses the same technique and that both species sniff at similar frequencies to land-living rats and take in comparable amounts of air. In a case of evolutionary improvisation, it seems that several swimming mammals have managed to use air bubbles as an vehicle for carrying scents into their noses.