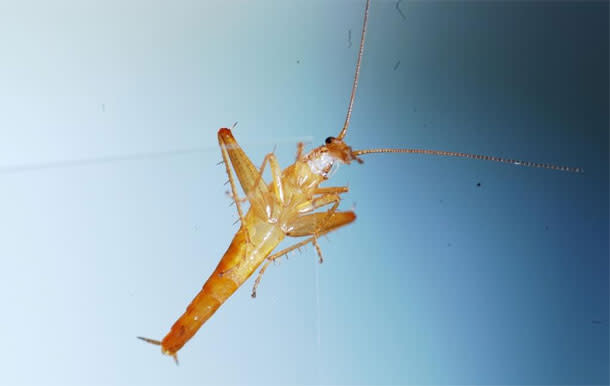 If it looks like a grasshopper, and jumps like a grasshopper, it might be a cockroach. Last year, Mike Picker from the University of Cape Town discovered a new species of cockroach (Saltoblattela montistabularis) that jumps about using unusually long legs. Dubbed the “leaproach", the insect was named one of the top ten new species of 2011. Picker actually found it in 2006 while searching for an unrelated species of fly. It is a close relative of that famous pest, the German cockroach, but its body is very different. Its hind legs are huge, and around 70 per cent of its movements consist of jumps and hops. That makes it unique; all the rest of the 4,000 or so cockroach species get around by scuttling. Only one prehistoric species, which lived in the Jurassic period, had the legs of a jumper. [embed width="610"]http://www.youtube.com/watch?v=t8DeAh-2nik[/embed] The male leaproaches are barely longer than a centimetre, and the females are shorter still. But they cover up to 35 centimetres in a single bound – that’s 48 times a female’s body length. For comparison, the German cockroach can only cover 4 centimetres in a jump, or 3 body lengths. Even locusts can only cover 20 body lengths (although the record-breaking froghoppers can manage 114 of them). Picker found the leaproach at Table Mountain in South Africa, where it lives among grasses, low-growing heathers, and beautiful protea flowers. Its habitat is full of grasshoppers, and the leaproach’s body has evolved in many ways that resemble those of its more famous leaping neighbours. They’re a great example of convergent evolution – where two species turn up to life’s party accidentally wearing the same clothes. Like a grasshopper, the leaproach powers its mighty jump with a huge pair of back legs that are twice the length of its other four, and longer than its entire body. The legs have other grasshopper-like features. Thier femur (the part closest to the torso) has a groove that the adjoining segment (the tibia) can tuck into, allowing the leg to flex back as far as possible before a jump. And the muscles in femurs are so big that they make up a fifth of the roach’s body weight. By filming the leaproach with high-speed cameras, Picker calculated that as it takes off, it accelerates at over 23 times gravity, and reaches a speed of 22 miles per hour. Even with its butch legs, the leaproach shouldn’t be able to jump with such power if it simply contracted its leg muscles. Picker confirmed that by showing that the muscle which extends the roach’s hind legs start contracting for a fifth of a second before it takes off. The roach must have some way of storing energy before the jump, in the same way that bows or catapults store energy before releasing their payloads. Most jumping insects (with the exception of bush crickets) have their own storage device, each with its own distinctive combination of springs, levers and latches. When the legs bend, they compress a springy structure containing resilin – an extremely elastic protein that beats the best rubbers made by humans. Some type of latch, be it a physical structure or an opposing muscle, holds the leg in place until the right moment. When the latch is released, the energy stored in the spring is released, catapulting the leg outwards. The leaproach probably uses a similar mechanism, and Picker certainly found resilin in the joint between its femur and tibia. The leaproach has other adaptations for a jumping lifestyle. Its wide protruding eyes probably give it good vision, and allow it to accurately spot its landing positions. And its antennae have an extra joint in their base that allows them to be swept backwards during take-off. It’s clearly a successful strategy: the roach jumps about so well that it has lost the ability to fly. Its legs may be powerful, but its wings have shrivelled to useless nubs. Why in all the world is there a single jumping cockroach? No one knows. It may have something to do with the leaproach's home among tall grass stems - jumping is an efficient way of getting from stem to stem. It may have something to do with South Africa's fynbos - a habitat of shrubs and heath that's unusually rife with unique species that are found nowhere else. In 2002, an entirely new group of insects called the gladiators was discovered in the fynbos. The leaproach followed suit a few years later. If a jumping cockroach can remain hidden for all this time, who knows what else we will find in the future? 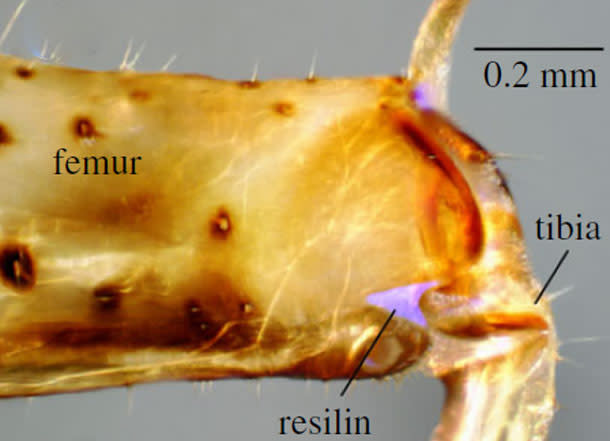