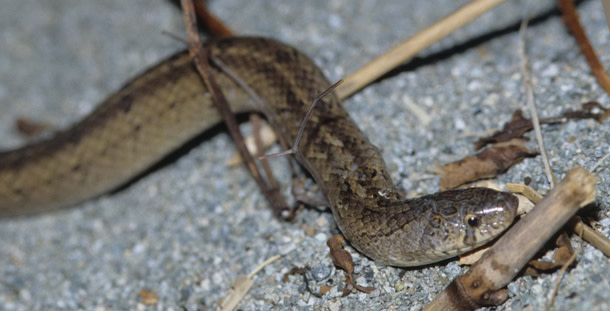 On Orchid Island, off the coast of Taiwan, green turtles come ashore to lay their eggs. A single female can deposit around a hundred eggs, and the island’s beaches are littered with these clutches. These nests are such a rich source of food that they are worth defending. And that’s exactly what the Taiwanese kukrisnake does. The females treat turtle nests like their own private larder. They guard them, and aggressively ward off rivals with a false head and dagger-like teeth. Kukrisnakes are named for a special set of teeth. These are shaped like kukris, the curved knives that are the signature weapon of the Nepalese gurkhas. The gurkhas, renowned as brave and fierce warriors, use their kukris to behead their enemies. The kukrisnakes use their weapons merely to slit eggshells, but they can also be used in combat. People who have mishandled these snakes have been left with gushing open wounds for their carelessness. There are several different kukrisnakes and they’re just a few of the 2,700 or so serpent species alive today. But the Taiwanese kukrisnakes are the only definitively territorial ones of the lot, and even then only the ones on Orchid Island are, and only the females. Despite a few anecdotal reports, no other snake species protects a specific resource over a long period of time. Why makes this specific population of snakes different? To find out, Wen-Sen Huang from Taiwan’s National Museum of Natural Science spent eleven consecutive summers studying the snakes on Orchid Island. He was the one who discovered the behaviour in the first place, while doing some fieldwork on the island. He found that the snakes will quickly find a new turtle nest and burrow into it. Females are far more territorial than males. If a male arrives at an empty nest, his tactic is to eat as much as he can and leave. But a female will guard her claimed nests for weeks at a time. If she arrives in a nest with a male inside, she forcefully evicts him, even though he is generally bigger than she is. If Huang introduced captured kukrisnakes into burrows that were already occupied by females, the intruders had better chance of sticking around if they were also females. If they were males, they would hurriedly slither away, often with fresh wounds on their tails. 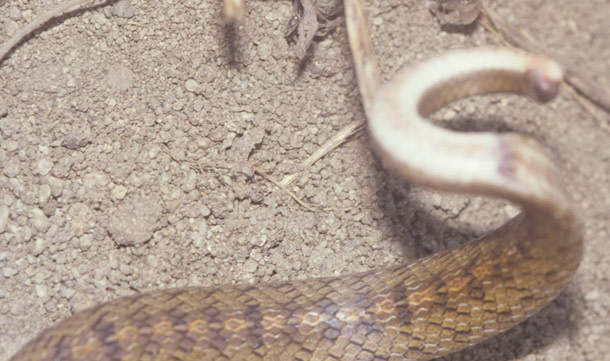 When kukrisnakes fight, they threaten each other with their tails, presumably in an attempt to mimic a second head. When your opponent fights with a mouthful of razor-sharp daggers, it pays to give them something to aim for that isn’t your head. The teeth can inflict severe wounds. Entire tails can be severed. And this could explain why the females are so much more territorial than males. “Males are much easier to get rid of because they have so much more to lose if their tail is slashed during a fight,” says Rick Shine, who led the study. A male’s tail also houses his penises (yes, plural; snakes and lizards have a forked double-headed penis), which he sticks out during his fighting display. One skilful strike from his opponent, and his chances of fathering the next generation could painfully disappear. As a result, males are more timid fighters than females. They would rather be lovers than fighters, so they concede disputes more easily. This unique combination of traits explains why these snakes, and especially the females, are uniquely territorial. They have the right weapons to defend their resource, and they have a valuable resource to defend. An average turtle nest will allow five kukrisnakes to eat at least four times their body weight. The mother turtles abandon the eggs after laying them. The eggs take two months to hatch, allowing the snakes to devour them at their leisure. In the turtle nests, the Orchid Island kukrisnakes have found the mother of all food sources – a big, tightly clustered, immobile and undefended hoard of nutrients, which will last for weeks without going off. A plant would tick all the same boxes, but there are no vegetarian snakes. Other egg-containing nests would come close and, indeed, there are many egg-eating snakes that also have sharp cutting teeth. They have weapons, but no incentive to use them. They feed on far smaller clutches, which provide less filling meals than the giant hatcheries of turtles. A nest of ants or termites would tick the right boxes too (although it would also be harder to rob), and the worm-like blindsnakes do eat the eggs and larvae of these insects. They have incentive, but no weapons. Their mouthparts are tiny and degenerate, and it’s laughable to think of them inflicting any sort of injury on each other. The female kukrisnakes of Orchid Island have exploited the perfect combination of variables. As Huang writes, “Unusual circumstances have favoured this surprising evolution of territorial behaviour, such that only females can defend a long-lasting and abundant supply of food with little additional cost.”

The first year that Huang worked with kukrisnakes. He wore gloves in later years.