Jungle Cat to Potential Prey: Nobody Here but Us Monkey Babies 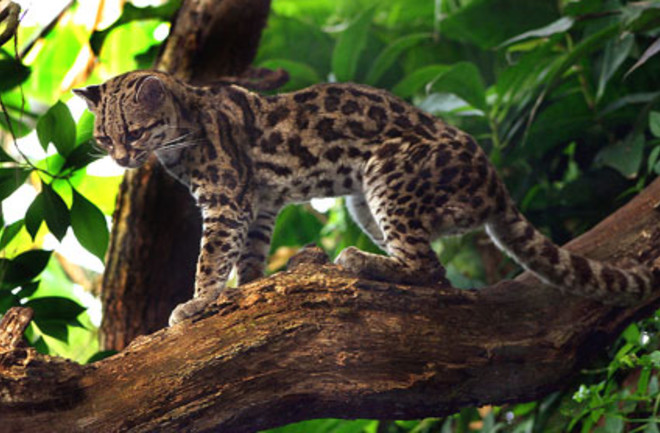 One pied tamaran turns to another: Do you hear that infant monkey call?That's one weird-sounding baby, the other responds. Shrugging their shoulders, the pair goes to investigate. Surprise! It's not a baby monkey at all, but a margay cat doing impersonations. Then it's up to the monkeys to escape becoming a snack. In the domain of jungle tricks, monkeys usually take center-stage. They may give false alarms to steal bananas or (shamelessly) carry an infant to strike up a conversation. But the above fake-out scene, documented in 2005 by Wildlife Conservation Society researchers, hinted that at least one feline is giving monkeys a dose of their own medicine. The small spotted margay won't be winning any stand-up awards: Fabio Rohe, a researcher at the Society, toldNational Geographic that the cat's impressions were "poor." Though researchers watched the monkeys escape, they still found the ruse impressive, given that no other cat is documented to have used vocal mimicry in hunting (though some people claim to have heard similar strategies used by jaguars and cougars). The margay's acting skills may soon prove crucial, since the South American species is threatened by hunting, the pet trade, and habitat destruction. As National Geographicreports, researchers believe the cat may have other animals in its "repertoire" including macuco birds and agouti rodents. Given its apparent skills and the fact that the seven-pound cat also eats lizards, perhaps the tongue-flick pictured here is only another act of cunning. Related content: Discoblog: How to Win Friends and Influence Monkeys Discoblog: Puerto Ricans Are Tired of Escaped, Belligerent Research Monkeys Discoblog: Monkeys Master Mind Control of Mechanical Arm Discoblog: Calvin Klein’s Obsession for Men (and Cats) 80beats: Why Gorillas Play Tag: To Learn Social Etiquette and to Settle Scores