Juicing Up the Atmosphere

On a summer's eve last year, atmospheric scientist Han-Tzong Su and an undergraduate assistant set up cameras atop a coastal resort in southern Taiwan, hoping to spot sprites—red flashes that erupt after powerful lightning strikes. The researchers, from Taiwan's National Cheng Kung University, found something stranger. During a storm, five branching jets of electric current streaked upward 50 miles from the thunderclouds. Four of the jets produced low-frequency radio noise so powerful it was detectable 1,000 miles away.

The jets, similar to one spotted by Victor Pasko of Penn State last year (bottom from left to right), appear to be a significant missing part of the global circuit that shuttles electric charge from the ground to the atmosphere and back again. "Thunderstorms play the role of the battery for the circuit," Su says, by sending current upward into the atmosphere; lightning strikes, counter to intuition, transfer current from ground to cloud. At any moment, there are about 2,000 thunderstorms injecting 1,000 amps into the ionosphere. Some of that charge slowly leaks back down to Earth during fair weather. Su suspects that the gigantic jets—possibly aided by sprites and other electrical phenomena known as blue jets—provide an alternative path for the ionosphere to lose its charge.

Su speculates that the jets form only over oceanic thunderstorms, which would explain why previous land-based studies did not reveal them. "The discovery reminds us that our understanding of Earth's environment is not as complete as we would like to believe," he says. 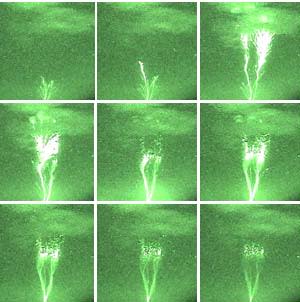 A giant jet of electricity streaked 45 miles above the ocean near Puerto Rico.Photographs courtesy of Victor Pasko.