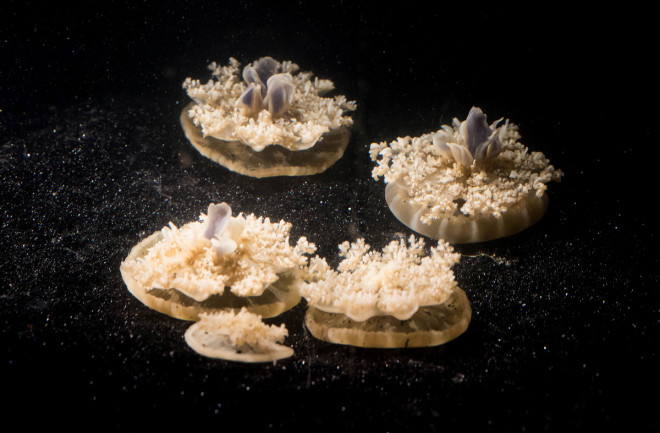 Bees, sharks, anteaters, humans, we all share the need for sleep. Why we do it is of course still largely a mystery, but the fact of it remains incontrovertible. Now, new research on jellyfish is pushing the origin of sleep even further back down the evolutionary tree, before even the appearance of brains.

It's long been known that any creature with a central nervous system needs to sleep, but jellyfish are effectively brainless. They do have neurons arranged into a "nerve net" throughout their bodies, but they diverged from us before the appearance of a true brains.

Nevertheless, researchers observed three important behavioral components of sleep in the jellyfish, indicating that they must indeed regularly enter a sleep-like state to survive. The finding highlights anew how crucial sleep is for our survival, and indicates that it could be a fundamental property of neurons themselves.

To be truly asleep, an animal must meet three key thresholds. They must show lower levels of activity, a state called "quiescence;" it must be harder to elicit a response from them once they fall asleep; and they must prove to function worse if they don't get to sleep. Researchers from Caltech and the Howard Hughes Medical Institute designed three experiments to test each component individually in the upside-down jellyfish Cassieopea. The findings were published Thursday in Current Biology.

The first experiment involved simply watching them as they slept. The jellyfish pulse regularly, it helps them move things around their body and feed, and when they sleep, the rate of pulsation decreased significantly.

Still, just chilling out for a while doesn't equate to sleep — more rigorous tests of the upside-down jellyfish were needed. As the name suggests, these creatures spend much of their lives doing a head-stand. They prefer to rest on the seafloor, stretching their stinging tentacles upward in search of food.

The second experiment involved lifting them off the seabed with a specially-designed tube and then dropping them quickly so they were floating free. Normally, alert jellyfish swim right back to the bottom, but if they were asleep before getting dropped, it took them a few seconds to get in the groove.

"When we saw this experiment we all got a lot more confidence in the project," says co-author Michael Abrams. "Having that second component brought it to the point where we were seeing something beyond behavioral quiescence."

For the final test, the researchers deprived the jellyfish of sleep for a short period by introducing regular currents to their tanks. Kept up all night, they proved to function worse the next day and slept even more to make up for the debt, much like we would after an all-nighter. All together the tests brought enough evidence for the researchers to conclude that the jellyfish were indeed regularly entering a sleep-like state.

This is the first time such a state has been observed in a creature with a primitive nervous system like this, and it wasn't entirely expected for the researchers. Humans and jellyfish diverged hundreds of millions of year ago, which means that there would need to be strong evolutionary pressures for it to stick around for so long.

"From jellyfish to humans, which is basically as evolutionarily distant as two animals could be, they both have this conserved behavioral state," says co-author Claire Bedbrook. "[It] really emphasizes how important this state is and also may help us in future hypotheses toward why it is that things sleep."

"The sleep state that was originally the same behavior has evolved and been decorated over time to what it is now in humans where it's really important for very high level cognitive functions like memory consolidation — things we probably won't see in jellyfish," Bedbrook says.

However, dosing the jellyfish with melatonin, a chemical that makes us sleepy, caused similar reactions in the jellyfish. The link is an indication that some of the same factors regulate sleep in both our bodies. It's one of the first times anyone had thought to ask if jellyfish sleep, they say.

The work was born out of a larger question as to whether all animals actually sleep — something assumed but never tested. Finding a sleep state in jellyfish means that we can no longer describe sleep as limited to animals with brains, another assumption. Instead, it seems to also exist in creatures with neurons but no central nervous structure, meaning that it could be a requirement of the cells themselves.

Narrowing down the province of sleep — from brains to neurons — would allow researchers to design more focused experiments to probe the underlying physiological basis of a good night's rest. Till then, we'll just have to sleep on it.