It's not really pi day 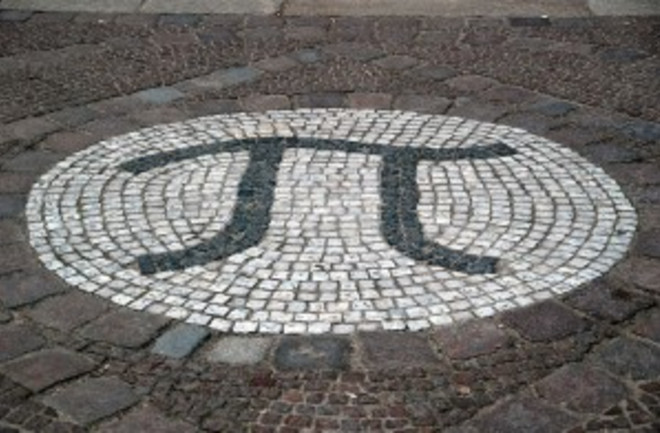 A mosaic outside the mathematics building at the Technische Universität Berlin. Wikimedia Commons

When I heard that today is supposed to be pi day, 3/14, I found it hard to get very excited. If this were March 14, 1592 -- giving four more digits of the decimal expansion -- that would be a more interesting coincidence. But that day has come and gone. Or did pi day come and go today (and every March 14) at 1:59 am and 26 seconds? Or 26.535 seconds. That is still far from precise. With an infinite number of digits in the decimal expansion -- a sequence that never repeats -- pi day would last an infinitesimally short period of time.

When mathematicians say that pi is an irrational number, they don’t mean that there is anything inherently crazy about it. It’s just that it can’t be expressed as a ratio of two integers. 2/3 can be turned into an infinitely long decimal -- .666666 -- but the numbers conveniently repeat. It's true that pi is the ratio of the circumference of a circle to its diameter, but you can't compute it that way. You would have to know both the distance around and across the circle to infinite precision. Nothing in the physical world can measure anything so perfectly.

Why we should live in a universe where pi isn’t exactly 3 is very strange. But how many of those digits -- mathematicians have calculated trillions of them -- actually matter?

Thinking of this, I was reminded of something I wrote long ago for The New York Times: that knowing pi to just 61 decimal places is enough to describe a circle surrounding the visible universe with a deviation of less than a single Planck length -- a unit 10 20 times smaller than a proton. This seems as close to perfectly circular as a real circle can be. Do the rest of the decimal places have any meaning?