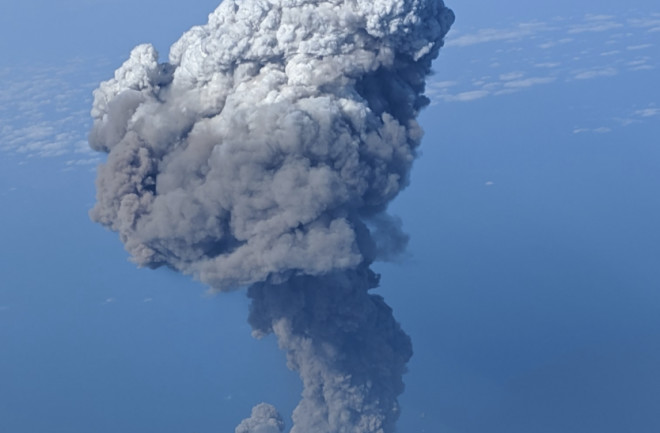 There is the strong tendency in humans to look for patterns, even when none exist. This is amplified by the modern effect of news media, where certain events make headlines for reasons not necessarily related to the severity of the event.

See the update below on the 7/6 earthquake in California.

We see this frequently in geology, where a news-making eruption or earthquake then starts a cascade of reports of other eruptions and earthquakes that follow, even if they aren’t disasters. This feeds into our propensity to construct patterns from things, even when one doesn’d necessarily exist. For example, when read about a bunch of geological events, it’s tempting to think: “Uh oh, the Earth must be getting more active!”

The truth is that earthquake and eruption activity does wax and wane, but over time, our planet is not “becoming more restless” than it was 100 or 1,000 or 10,000 years ago. Most earthquakes and eruptions are sprinkled randomly over time and that randomness sometimes produces clusters of events. Flip a coin 100 times and you might get 8 heads in a row, then none for another 10 tosses. That’s clustering in a random distribution.

Over the last few weeks, it might have felt like the Earth was behaving differently. We’ve had big eruptions at Raikoke, Ulawun, Manam. We’ve had earthquakes felt in across the globe: 14 over M6 on the Richter scale in the past 30 days. Yet, in an average year, these things happen. They might not happen in a span of a fortnight, but then again, sometimes they do.

People’s perceptions of eruptions can be skewed as well. The eruptions at Raikoke, Ulawun and Manam were all big. They produced some of the tallest ash plumes we’ve seen in a few years, reaching over 12-15 kilometers high (>30,000 feet). They were clearly newsworthy events, especially in the case of the two eruptions on Papua New Guinea, where tens of thousands of people live near the volcanoes.

Luckily, for all three of those giant blasts, it appears that no one was killed. However, another volcano — this time Stromboli in Italy — erupted in an unexpected fashion. The volcano is one of the most active on Earth, so much so that is has been referred to as the “lighthouse of the Mediterranean.”

Most of its eruptive activity is fairly tame, confined to small explosions at the summit. This means that lots of tourists like to visit the tiny volcanic island of Italy’s western shores so that they can see this volcano in action.

This familiarity with the volcano’s usual activity can cause people to think the volcano is more benign than it truly is. Stromboli can produce more explosive eruptions, sometimes unexpectedly. This is what happened on July 3, when the volcano exploded (see above), sending ash, papilla (larger volcanic fragments) and volcanincn bombs across the island, generating a small pyroclastic flow that headed down the side of the volcano into the ocean (see below).

Many tourists on the volcano had to immediately seek cover and some even jumped into the sea. The eruptions started fires on the slopes of the volcano as well. Unfortunately, one person was killed due to the flying volcanic debris from the blast, the volcano’s largest since 2007.

Now, compared to Raikoke, Ulawun and Manam, this eruption was very, very small. The ash plume was only 2 kilometers (~6,500 feet). In the geologic record, the Stromboli eruption would likely quickly be lost because so little material actually came out. Yet, because people crawl over the slopes of the volcano, even a small but powerful blast can capture the world’s attention.

Earthquakes like the Ridgecrest temblor are one of the few cases that a large earthquake causes other earthquakes, but those come in the form of aftershocks. There was a M5.4 earthquake on July 5, caused by the change in stress on the faults near the epicenter. We might expect that aftershocks could continue for many weeks afterwards, but they’ll smaller over time.

UPDATE 7/6: Apparently the M6.4 earthquake on 7/4 was a foreshock rather than an aftershock! The same stretch of fault was struck by a M7.1 earthquake late on 7/5 and this quake was strongly felt across much of Southern California and even into Nevada and Mexico. This new earthquake was the largest in California in nearly two decades and it caused damage to roads and buildings across the region.

Foreshocks are earthquakes along a fault that precede the largest earthquake in a sequence. Dr. Lucy Jones (Caltech/USGS) thinks that the area is still looking at a 10% chance of another M7 in the coming weeks, while strong aftershocks >M5 will almost definitely occur. That being said, let’s be clear: it will not trigger earthquakes outside this area.

So, we need to all be aware of our tendencies to come up with patterns in the noise — and how the media shapes how we think of events. Although it might seem like something odd is going on with all these eruptions and earthquakes, it truly is “business as usual” for the planet.