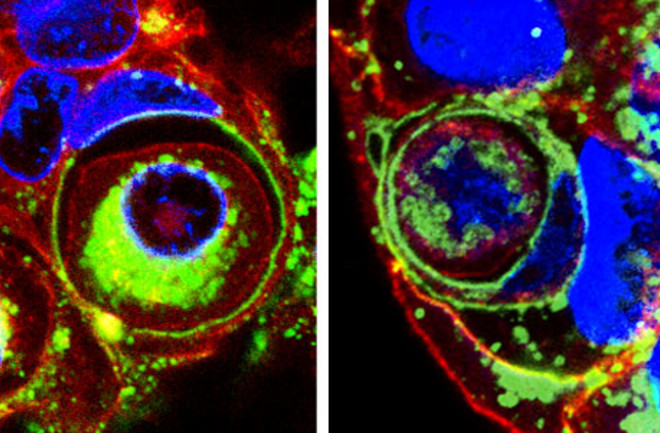 Remember that scene at the end of The Matrix when Keanu Reeves dives headlong into the Agent Smith's torso and writhes around inside? It turns out some cells in the human body can do something pretty similar — except without the whizzy special effects. Harvard researchers today described a new cellular process — they named it entosis — where one cell bores into another. Most of these interlopers die inside the other cell, but some survive and leave after a brief romp inside the host — and some even divide within the other cell.

The process appears to be distinct from apoptosis — cell suicide — though for most invader cells, the end result is the same. While apparently unharmed, the host cell doesn't seem to welcome this invasion. (And really, would you?) It forms inhospitable pockets around the invader that most often kill it through acidification. Other invaders kill themselves by apoptosis, though only after they've successfully stormed another cell. Others survive and leave the host cell, seemingly unharmed.

"I think it’s a very exciting discovery," says Hermann Steller, a cell biologist at Rockefeller University who was not involved in the research. "It’s sort of providing an explanation for an observation that’s been observed previously."

Postdoctoral researcher Michael Overholtzer virtually stumbled across entosis while working with a type of lab-grown breast cancer cells. Overholtzer noticed that there were some drifter cells seemed to have other cells inside them. During a fortuitous chat at a conference, a colleague told Overholtzer that this phenomenon had been seen many times in cancerous cells.

"Serendipitous is a good word for it," he says, "I don’t want to say we fell on top of it, but we kind of did."

Although pathologists had seen cells within cells before, they didn't know how they got to be there. Some suspected that the outside cell had engulfed a dead or dying cell undergoing apoptosis. But when Overholtzer studied the cells, he saw that the apparently healthy cells weren’t being engulfed or destroyed by other cells. In fact, they seemed to initiate the process, burrowing into the other cell. This was something that had never been seen in any cells, and Overholtzer didn't really believe it was happening until they cobbled together a conclusive video.

Since then the team has seen entosis in several healthy human cell types and in patient breast cancer samples. It will take more research to determine why cells act this way — the invaders' motives, if you will.

At the moment, Overholtzer and his colleagues suspect entosis may have a role in preventing cancers from developing or spreading by metastasis. While Steller says the new research raises many new questions, he's convinced that the team's "very careful, very systematic" work has revealed something new, exciting­­­ — and rare: "It doesn't occur that often that you come across a completely unexpected cellular phenomenon."