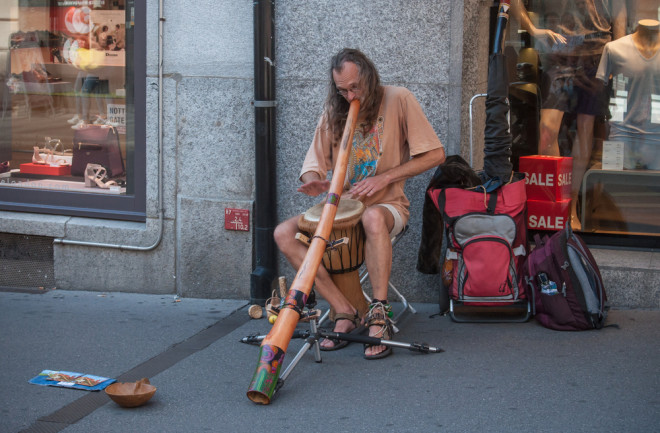 This man sleeps well. (Credit Shutterstock) Not all science needs to be so serious. Since 1991, the Ig Nobel Prize ceremony has proven that the best scientific research can sometimes be a mix of impactful and irreverent. Let’s check out this year’s winners, broken down by scientific category.Physics: "On the Rheology of Cats" Cat owners are familiar with the peculiar quality of felines to fill whatever vessel they occupy, much like a liquid. So it’s only appropriate that the field of rheology, or the branch of physics that studies the flow of matter, would study cats’ liquid properties. The study is easily worth the read for the photos alone.

If it's a vessel, cats will find a way to fit in it. A study that examined feline fluid dynamics was among this year's winners. (Credit: Shutterstock)Peace: “Didgeridoo Playing as Alternative Treatment for Obstructive Sleep Apnoea Syndrome: Randomised Controlled Trial” Peace need not be on a macro scale — anyone in the proximity of a heavy snorer will attest that their peace is being pretty heavily disrupted. Fortunately, a didgeridoo instructor realized his students experienced less daytime sleepiness and snoring. Turns out, the training of the muscles in the upper airways helps diminish sleep apnea symptoms. Peace at last. Economics: “Never Smile at a Crocodile: Betting on Electronic Gaming Machines is Intensified by Reptile-Induced Arousal” In one of the stranger Ig Nobel winners, tourists to a crocodile farm were assigned to play a digital gambling machine. Some participants only gambled, others were told to hold a small crocodile, then gamble. The researchers' hypothesis: Mental and emotional arousal caused by the croc may have an effect on gambling patterns. As it turns out, those who were frightened of the crocodile placed lower-than-average bets, and those who were less emotionally troubled by the reptile placed higher-than-average bets. So maybe avoid hanging out with your snake before heading to the slots. Anatomy: "Why Do Old Men Have Big Ears?" You may have heard the adage that the only two parts of the body that never stop growing are your nose and ears. But is it true? This study of over 200 male participants established an average growth rate of men’s ears of about .22 millimeters a year. All the better to hear you with, my dear.

Fluid Dynamics: “A Study on the Coffee Spilling Phenomena in the Low Impulse Regime”

Any barista will tell you one of the greatest pleasures of the job is watching people struggle to not spill their coffee. No matter the tactic — slow-walking, steady hands, mug-staring, etc. — nothing seems to help avoid the inevitable spill. This study establishes a new and effective anti-spill method: walking backwards. Nutrition: “

What is for Dinner? First Report of Human Blood in the Diet of the Hairy-Legged Vampire Bat Diphylla ecaudata”

Remember that turning point when you learned that vampire bats don’t actually consume human blood? Remember that rush of relief that your precious plasma was safe and sound? Well, turns out it’s not. This study establishes the first case of the hairy-legged vampire bat consuming human blood. Break out the garlic.

The Neural Bases of Disgust for Cheese: An fMRI Study”

Hard to imagine, I know, but some people really hate cheese. Such an inexplicable phenomenon of course warrants deeper investigation, so this study placed 15 cheese lovers and 15 cheese haters one by one into an fMRI machine. The participants were then exposed to six cheesy smells and six non-cheesy smells. The results of their brain activity seem to indicate the reward and disgust centers of the brain may be linked. Ground brie-king! Cognition: “

Is That Me or My Twin? Lack of Self-Face Recognition Advantage in Identical Twins”

This study found that twins have a more difficult time identifying their own faces in photos than non-twins. The results bring up interesting questions of what role facial recognition and perception play in personal identity. Talk about an identity crisis. Obstetrics: “

Forget headphones on the belly — you’re better off putting a speaker inside your vagina. This study shows that when exposed to music played inside the mother’s vagina, fetuses had a stronger response in their facial expressions. One of the scientists even developed a special speaker you can pop in for the best possible fetal jam session. Rock on, baby.