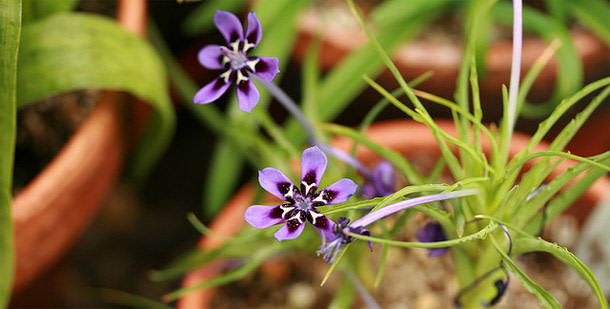 The rare South African iris (Lapeirousia oreogena) has a ring of six stunning purple petals, atop an equally vivid straw-like stem. The petals have white marks, which look like arrows pointing towards the centre of the flower. And that’s exactly what they are. The iris is pollinated by the accurately named “long-proboscid fly”, whose tongue is twice as long as its body. It hovers over the flower and aims for the centre, driving its tongue deep into the stem to reach the pool of nectar at the bottom. As it drinks, its head pushes against the flower’s male organs, which deposit a dollop of pollen. When the fly leaves, it carries this payload to another iris. The flies and the flowers are intimate partners of evolution. The long tongues and stems have been perfectly aligned to give one partner a drink and the other a flying sexual aide. All of this depends on the white arrows. When Dennis Hansen from the University of Kwazulu-Natal painted over the markings, the fly could no longer find the flower’s centre. The arrows are like a sign that says, “Insert tongue here”. 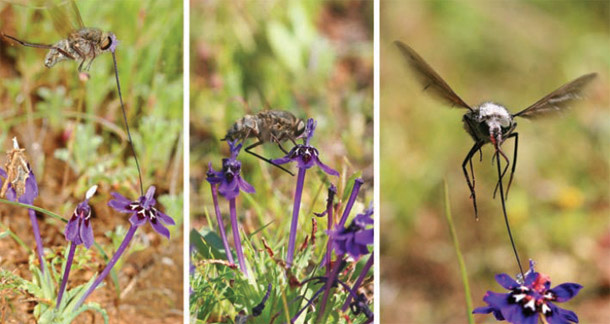 The iris’s arrows are an example of a “nectar guide” – a set of spots, lines, dots or markings that signal the way to nectar. They stand out sharply against the rest of the flower, often in colours like ultraviolet that insects and birds can see but humans cannot. These guides were first described in 1793 by the German naturalist Christian Konrad Sprengel, who suggested that they help pollinating insects to adjust their positions as they approach flowers. Since then, several studies (although surprisingly few given the intervening centuries) have confirmed his idea. Hansen’s is the latest. He used a black marker pen to colour in the arrows of wild irises. Flies were equally likely to approach all of the flowers but they only probed about with their tongues if the arrows were visible. Of those that tried when the arrows were blacked out, only 8 percent succeeded. To see whether the flowers suffered, Hansen laced the male organs of his flowers with fluorescent powder. He used different colours for those whose arrows had been blacked out and those whose arrows were still visible, so he could track the spread of pollen from individual flowers. A few days later, Hansen wandered through the fields after dark, searching for the glowing powder with a hand-held lamp. He saw that around half of the flowers with arrow-markings had spread their powder (and thus their pollen) to other flowers. For comparison, just 5 percent of the blacked-out blooms had exported their grains. The flowers with arrows were also more likely to eventually bear fruit than those without them. These simple but clever experiments clearly show that the white marks guide the tongues of the pollinating flies, but only once they’re near the flower. In fact, the flowers that are pollinated by long-tongued flies do tend to have similar striking marks, even though they can hail from distant families. Hansen thinks that visual guides might be especially important to these insects, which need something to help them aim their long, unwieldy tongues. Reference: Hansen, van der Niet, & Johnson. 2011. Floral signposts: testing the significance of visual ‘nectar guides’ for pollinator behaviour and plant fitness. Proc Roy Soc B http://doi:10.1098/rspb.2011.1349 Image by Dogtooth77More on pollination: