Insecticides May Be Giving Songbirds Anorexia and Delaying Their Migrations 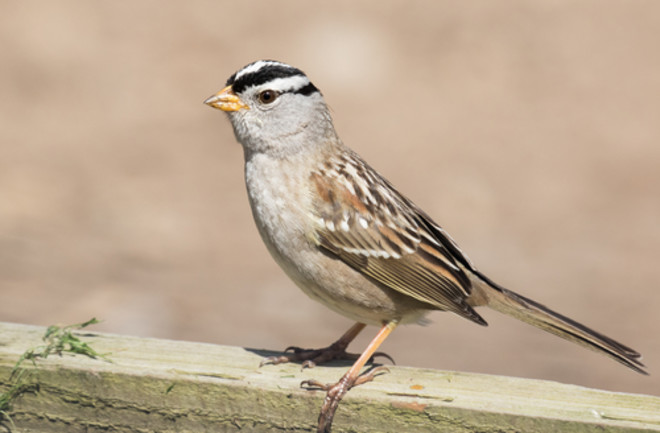 An experiment with white-crowned sparrows shows that insecticides may be impacting songbirds. (Credit: Phil Lowe/Shutterstock)

Some migrating songbirds may be starving thanks to agricultural pesticides. Neonicotinoids are popular insecticides used in industrial agriculture across the U.S. But the chemicals’ are controversial because of their detrimental impact on bees and other pollinators.

Now, a group of researchers has added heat to the debate, showing that even small amounts of one particular neonicotinoid — a neurotoxic insecticide called imidacloprid — can affect migrating songbirds’ appetites. The birds ate less and stayed longer at stopping points along their migration after being exposed to the pesticides. And the researchers see reason to worry that those delays could affect the birds’ survival.

“Migration is a critical period for birds and timing matters. Any delays can seriously hinder their success in finding mates and nesting, so this may help explain, in part, why migrant and farmland bird species are declining so dramatically worldwide,” University of Saskatchewan biologist Christy Morrissey, senior author on the study, said in a press release.

Worldwide, neonicotinoids are one of the most popular insecticides. Imidacloprid and other neonicotinoids send the nervous system into overdrive. And while the pesticides work best on insects, they can also affect vertebrates, including birds. Nearly three-quarters of birds that depend on farmlands saw dwindling populations between 1966 and 2013.

To determine how imidacloprid might affect migrating songbirds, Morrissey and colleagues caught wild white-crowned sparrows as the birds migrated from the continental U.S. through Ontario to the arctic regions of northern Canada. The researchers gave some of the birds very low doses of imidacloprid. Six hours later, the team weighed the birds and analyzed body composition for fat stores. They also measured how much food the birds ate.

At a time when migrating birds typically consume excessive amounts of food to build up fat stores for migration, the researchers instead found imidacloprid-treated birds ate up to 70 percent less food than birds that did not receive a dose of the chemical. Birds that consumed the pesticide also lost weight, mostly in terms of their fat stores the team reports Thursday in the journal Science.

“We saw these effects using doses well within the range of what a bird could realistically consume in the wild – equivalent to eating just a few treated seeds,” environmental toxicologist Margaret Eng, lead author of the study, said in the press release.

The researchers also found that the treated birds stayed longer at stopping points along their migration. Birds that hadn’t received the insecticide stayed for about half a day, but treated birds stuck around for another three and a half days. Some even lingered for more than a week.

“Both of these results seem to be associated with the appetite suppression effect of imidacloprid,” Eng said. “The dosed birds ate less food, and it’s likely that they delayed their flight because they needed more time to recover and regain their fuel stores.”

The findings point to a dire situation for migrating songbirds. “Our study shows that this is bigger than the bees – birds can also be harmed by modern neonicotinoid pesticides, which should worry us all,” York University ecologist and study co-author Bridget Stutchbury said in the press release.