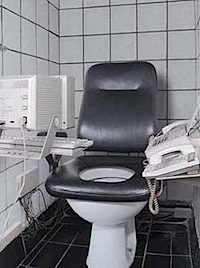 Our minds are battlegrounds where different media fight for attention. Through the Internet, desktops, mobile screens, TVs and more, we are constantly awash with headlines, links, images, icons, videos, animations and sound. This is the way of the 21^st century - a saturated sensory environment where multi-tasking is the name of the game. Even as I type these words, my 24-inch monitor displays a Word document and a PDF side-by-side, while my headphones pump Lux Aeterna into my head (see image below).

You might think that this influx of media would make the heaviest of users better at processing competing streams of information. But Eyal Ophir from Stanford University thinks otherwise. From a group of 262 students, Ophir indentified two sets of 'light' and 'heavy' multimedia multi-taskers from the extreme ends of the group. The heavy users were more likely to spend more time reading, watching TV, surfing the web, sending emails or text messages, listening to music and more, and more likely to do these at the same time.

The heavy group also fared worse at tasks designed to test their ability to filter out irrelevant information or, surprisingly, to switch from one task to another. In short, they show poorer "cognitive control", a loosely grouped set of abilities that include allocating attention and blocking out irrelevancy in the face of larger goals. They're more easily distracted by their many incoming streams of data, or less good at shining the spotlight of their attention on a single goal, even though they are similar to the light group in terms of general intelligence, performance on creativity tests, basic personality types, and proportion of women to men.

While the world's media (*cough*Susan Greenfield*cough*) will probably showcase this work as a sign of the mental deficits facing the Twitter generation, Ophir is more measured. For a start, his study wasn't just focusd on the online world, but on more traditional forms of media like books, radio and television. "It's probably good to think of this not as an advantage or disadvantage, but rather as a difference in orientation," he told me. "Light media multitaskers are more in control of their own attention and what information enters their minds, while heavy media multitaskers are more responsive to their environments, and more easily swayed by stimuli that are not pertinent to their current task."

Whether that's a problem or not depends very much on the situation. Being easily distracted might not be conducive to the task of knocking out a blog post, but in situations like driving a car, it can be an advantage to have your attention suddenly grabbed by something unexpected, like something on the road. 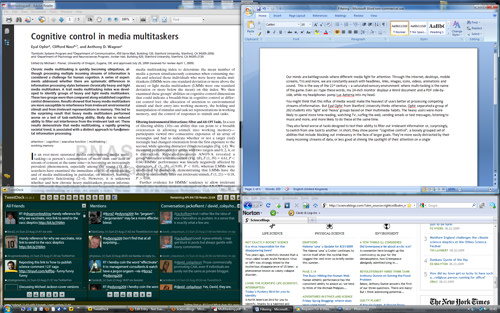 In the first task, the volunteers had to look at an array of rectangles and decide whether any of the red ones had changed position, while ignoring the position of the distracting blue rectangles. The light multi-taskers did reasonably well regardless of how many red rectangles there were, proving their skills at filtering out irrelevant targets. The heavy multi-taskers, on the other hand, started having problems when the number of targets was higher than four.

The same problem with filtering appeared in another test. Here, people saw a string of letters and had to pipe up when they saw a specific pair - say A followed by an X (but not AY or BX or BY). In this basic task, all the volunteers fared equally well, but not so if distractor letters started turning up in the middle of the pairs. These were in a different colour and were meant to be ignored; the volunteers had to pretend that they didn't exist. The heavy multi-taskers were worse at that than the light ones - no less accurate but significantly slower.

The heavy users also had more difficulties when filtering their own memories. They watched a series of letters flashing up on a screen and had to say whether the current letter matched the one that flashed up two or three rounds ago (these are called 2-back or 3-back tasks, respectively). These are no easy tests. They force the volunteers to constantly hold, update and monitor information in their minds and, understandably, the 3-back task is much harder than the 2-back one.

All the volunteers had similar hit rates in both tasks, but the heavy multi-taskers has many more false alarms when they moved to the harder 3-back task. They were particularly likely to make a bad call for letters that had previously appeared in the series, suggesting that their memories were more vulnerable to interference by seemingly familiar items.

Most surprisingly of all, given their natural leanings, the heavy multi-taskers were even worse than the light group at switching between two tasks! They were showed pairs of numbers and letters and they had to classify either the number as even or odd or the letter as a consonant or vowel, based on a signal that appeared beforehand. When they switched between these two goals, the heavy users reaction times slowed more considerably than those of the light users.

The key question here is whether heavy multimedia use is actually degrading the ability to focus, or whether people who are already easily distracted are more likely to drown themselves in media. "This is really the next big question," says Ophir. "Our study makes no causal claims; we have simply shown that media multitaskers are more distractable." The next step is to follow a group of people with different media habits over time to see how their mental abilities shift, and that's something that Ophir is working to set up.

Nonetheless, as ever-larger computer screens support more applications (Google Wave, anyone?), and social norms shift towards more immediate responses, it seems that multitasking is here to stay and perhaps merely in its infancy. It's important to understand if these technologies will shift our portfolio of mental skills, or equally if people who are naturally easy to distract will gravitate towards this new media environment, and encounter difficulties because of it.

While we find out, it's important to bear in mind that the tests in this study examined just a few aspects of cognitive control, and in turn, cognitive control is just one aspect of our repertoire of mental skills. We don't know whether media multitasking boosts performance in other areas that could compensate for deficits in some, and Ophir is open to the possibility of discovering such benefits.

Can't find the paper? Be patient - most journals have a few hours' delay between the lifting of press embargoes and the publication of papers. For PNAS, this can be up to a week.