Infants prefer a nasty moose if it punishes an unhelpful elephant 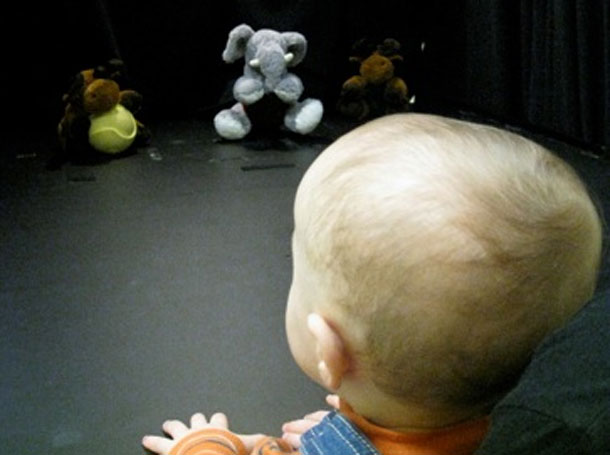 If you saw someone punching a stranger in the street, you might think poorly of them. But if you found out that the stranger had slept with the assailant’s partner, had kicked a kitten, or was Justin Bieber, you might think differently about the situation. You might even applaud the punch-thrower. When we make moral judgments, we do so subtly and selectively. We recognise that explicitly antisocial acts can seem appropriate in the right circumstances. We know that the enemy of our enemy can be our friend. Now, Kiley Hamlin from the University of British Columbia has shown that this capacity for finer social appraisals dates back to infancy – we develop it somewhere between our fifth and eighth months of life. Hamlin, formerly at Yale University, has a long pedigree in this line of research. Together with Karen Wynn and Paul Bloom, she showed that infants prefer a person who helps others over someone who hinders, even from the tender age of three months. These experiments also showed that infants expect others to behave in the same way – approaching those who help them and avoiding those who harm them. Now, Hamlin has shown that our infant brains can cope with much more nuance than that. She worked with 64 babies, and showed them a video of a duck hand puppet as it tried to get at a rattle inside a box. This protagonist was aided by a helpful elephant puppet that lifted the lid (first video), but hindered by an antisocial elephant that jumped on the lid and slammed it shut (second video). Next, the babies saw the two elephants playing with a ball and dropping it. Two moose puppets entered the fray – one (the ‘Giver’) would return the ball to the elephant (third video), and the other (the ‘Taker’) would steal it away (fourth video). The babies were then given a choice between the two moose. [embed width="610"]http://youtu.be/ByZLUg0crTc[/embed] [embed width="610"]http://youtu.be/YBHBTdvtoXs[/embed] [embed width="610"]http://youtu.be/6bIMd1oB1G8[/embed] [embed width="610"]http://youtu.be/dwYdFbI953A[/embed] Hamlin found that over three-quarters of the five-month-old babies preferred the Giver moose, no matter whether it returned the ball to the helpful elephant or the antisocial one. They were following a simple rule: “helpful moose = good moose”. But the eight-month-old babies were savvier. They largely preferred the Giver moose when it was aiding the helpful elephant, but they chose the Taker when it was took the antisocial elephant’s ball. In those three months, babies learn to judge an action not simply on whether it helps or harms a person, but also on whether that person deserved it. They prefer characters who help out good puppets, and who punish bad ones. They learn that context matters.

There is, however, another possible explanation. Perhaps the babies were just matching bad for bad. They saw the elephant behaving negatively, so they picked the moose that acted negatively to the elephant. Hamlin disproved this idea in a second experiment. This time, it was the duck that played with the ball and relied on the help of the two moose. Even if the duck had been wronged by an elephant, the babies still preferred the Giver moose. Finally, Hamlin found that toddlers show the same tendencies themselves. She showed 32 toddlers, aged 19 to 23 months, the same video from before but with dogs standing in for elephants. When she asked the babies to give a treat to one of the dogs, they largely picked the helpful one. When she asked them to take a treat away from a dog, they picked the antisocial one. Uta Frith, who studies child psychology at UCL, says that Hamlin’s earlier studies were “truly pioneering”. Indeed, many eminent child psychologists, like Jean Piaget, believed that infants only attend to their own needs and thoughts, responding only to an adult’s authority. Hamlin’s 2007study showed the opposite – infants are more than capable of making social judgments. Her new experiments take that conclusion to the next level. “The experiments make clear that young children do not merely put positive and negative values on agents on the basis of their experience, and prefer the goodie,” says Frith. “Instead, they can tell the difference between appropriate reward and punishment according to the context. To me this says that toddlers already have more or less adult moral understanding. Isn't this amazing? I don't know in what way adults would react in the same situation in a more sophisticated way.” Reference: Hamlin, Wynn, Bloom & Mahajan. 2011. How infants and toddlers react to antisocial others. PNAS http://dx.doi.org/10.1073/pnas.1110306108More on child development: