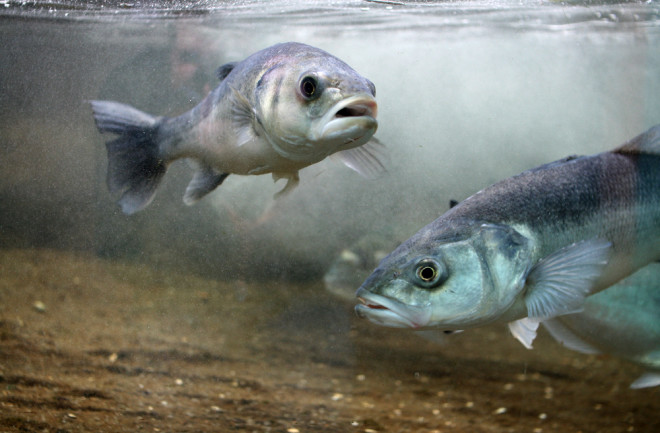 As CO2 levels rise, seawater becomes more acidic and harms fishes' sense of smell. (Credit: Al Pidgen/shutterstock) By the end of the century, rising CO2 levels will cut fishes’ sense of smell by nearly half, new research finds. And the impaired olfaction will threaten marine ecosystems and our food supply. That’s according to a report Monday in Nature Climate Change. Fish need a sharp smelling sense because many species spawn offshore, forcing newly hatched fish to find their way home by following their noses. Smell also helps fish locate food, communicate with their pals and recognize predators. Previous research revealed ocean acidification tied to climate change makes rockfish more anxious and hinders other fishes’ ability to learn. Since a fish’s nose is in direct contact with seawater, Cosima Porteus, a physiologist at the University of Exeter in the United Kingdom who led the new research, thought more acidic water might affect fishes’ sense of smell and their behavior.

So, Porteus and her team raised juvenile European sea bass in water with current CO2 levels, and another group in levels predicted to accumulate by the end of the century. As with the anxious rockfish, sea bass swimming in low pH water were less active and froze up more often when confronted with a predator’s odor than the fish paddling in water more typical of today’s oceans. And because they’re swimming less, fish in acidic ocean water reduce their chances of detecting the aroma of food and lurking predators. The researchers also examined how well the fishes’ olfactory nerves detected an array of odors. The team found water with elevated CO2 levels cut the nerve’s activity by almost half in relation to detecting food molecules, predatory shark stench and alarm cues. For the fish to detect some of the scents, they needed two to five times more odor molecules in the water. That means fish had to be 42% closer to detect smells, the researchers estimated, hampering the sea bass’ ability to find food and upping the chances that they’d become dinner. Since elevated CO2 levels reduce water pH, the scientists suggest the change in acidity may alter the shape of some odor molecules so that fishes’ smell receptors no longer recognize them, which may explain some of the loss of sensitivity.

To find out why, the researchers looked at changes to the expression of genes that convey smell to the brain. “I wanted to examine if fish had any ability to compensate for this reduced sense of smell, but found that instead of increasing the expression of genes for smell receptors in their nose, they did the opposite, exacerbating the problem,” Porteus said in a statement. The researchers also found acidic ocean water decreased the excitability of olfactory system neurons. Combined with depressed nerve sensitivity that means fishes’ higher brain centers receive less smell information, compromising their learning and memory. Altogether, changes in water acidity from rising CO2 levels impair fishes’ sense of smell on two fronts: the nose’s ability to sense smell and the central nervous system’s ability to process smells. Having to cope with this double whammy may reduce fishes’ ability to adapt to a changing climate, researchers say.