In the Octopus's Kindergarten

Scientists discover that even deep-sea creatures dote on their kids. 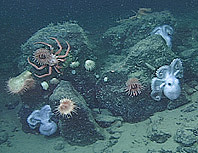 Three octopuses (top) and blob sculpins (bottom) tend their eggs. Such parental devotion was not expected in deep-sea animals.

Biologists Jeffrey Drazen and Shana Goffredi of the Monterey Bay Aquarium Research Institute in California have discovered a place where fish and octopuses brood their eggs as if they were chickens in a coop. This is the first time anyone has seen such animals watching over their young at great depth, just under a mile beneath the waves. The researchers first spotted the nursery in 2000 while using the unmanned submersible Tiburon, operated by the institute, to explore the Gorda Escarpment, an undersea ridge off the northern California coast. “All these fish and octopuses were just hanging around in a very large aggregation, which was totally unusual for the deep sea,” Goffredi says. The researchers realized the site was a brooding ground when they discovered that some bumps on a rock, recovered by the submersible, were octopus eggs.

Goffredi and Drazen, along with team members Debra Stakes and Brian Schlining, plan to revisit the site to find out whether the parents guard their eggs cooperatively and to investigate why the animals have chosen to brood there. It may be that the location provides the incubating eggs with oxygen, or a nearby cool-water vent could be bringing food to the hatched babies. “We plan to place small cameras on the seafloor and leave them there, taking several pictures a day,” says Drazen. A year later, the scientists will pick up the cameras to learn how the creatures behave and whether the nursery is used year-round.