In Memory of Lucy #scienceink 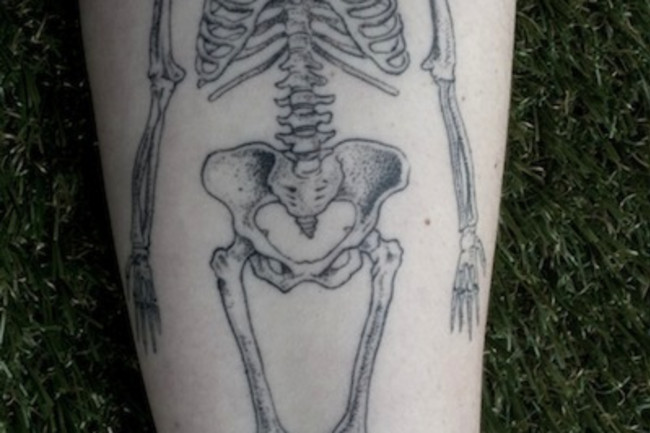 Please find attached a photo of my Australopithecus tattoo. I'm a medical anthropologist researching the historical relationship between school meals and obesity in children as part of my PhD at Durham University. Obviously this has very little to do with Australopithecus but my interest in "Lucy" began when I started my UG degree in Anthropology here at Durham. One of my first lectures was on our Biological and Social Origins and we learnt about our evolutionary heritage. Lucy caught my eye because she was one of the most complete finds of this species at that time. Also as it was thought that she was more closely related to Homo genus than any other Australopithecus at that time.

I found it fascinating that from her remains we could postulate that she was bipedal and from her pelvis we could deduce that she would have gave birth to a larger brained infant than previous species. We can further postulate that her infant care practices would be more similar to our own, larger brained infant would have to complete their growth outside the womb and would require parental investment as opposed to leaving the infants for long periods in a nest or them being fully mature to feed themselves. I have long been fascinated with our origins and have always loved tattoos so felt the need to combine the two.

I approached Anthony Wilkinson a tattoo artist at Dr Jekyll and Mr Hyde in Middlesbrough, UK. And his style of work was perfect for Lucy. We scoured the internet looking for an appropriate image and we found the one that I'm currently sporting on my arm today.

I love the idea that around 3 million years ago little Lucy was living her life with no idea--no concept--of tattooing, never mind how famous she would be in the anthropological world millions of years later.