In a scalding spring, one species of microbe is becoming two 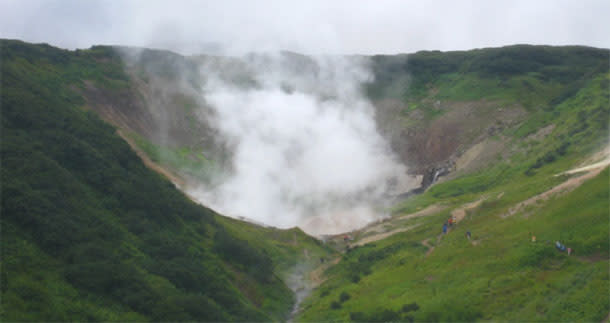 In a cauldron of boiling, acidic water, kneeling at the foot of a Russian volcano, one species of microbe is on the cusp of becoming two. Sulfolobus islandicus is an archaeon – one of many single-celled microbes that thrive in extreme environments. Mutnovsky volcano is certainly one such place. Found at the far eastern end of Russia, it’s full of churning, scalding springs that are nonetheless teeming with microscopic life. S.islandicus thrives in these springs, feasting on the sulphur within the water. Now, Rachel Whitaker from the University of Illinois has found that the species has pretty much split into two separate lineages. Both share the same water, and they can trade genes with one another, but they have started to part ways and are becoming increasingly distant. In this hot, hostile and acidic world, the origin of the species is playing out before our eyes. Whitaker collected 12 strains of S.islandicus from one of the Mutnovsky springs, sequenced their complete genomes and charted their evolutionary relationships. They were remarkably similar. At most, any two strains differed in just 0.35 per cent of their genome – far less than the distance between your DNA and a chimp’s. But the differences were telling. They revealed that the archaea had split into two distinct populations, which Whitaker called the Red and Blue groups. They look the same but they behave differently. The Red strains grow more readily, more quickly, and into denser colonies than the Blue ones. Microbes like bacteria and archaea can swap genes with great ease, through their version of sex. They’re very promiscuous about it too. Indeed, some scientists have suggested that archaea trade genes so frequently that the very concept of species is irrelevant to them. They don’t subscribe to the neatly branching tree of life that Darwin envisaged. Instead, they’re part of a tangled bush, a thicket, a net. Not so fast. Whitaker found that her Red and Blue groups were indeed trading DNA, but genes were flowing far more within each group than between them. There was a genetic barrier between them – leaky, sure, but there nonetheless. And it’s closing up. Recently, the Blue group has been donating less and less DNA to the Red one. The differences in their DNA aren’t building up evenly throughout their genome. Instead, they’re building up unique sequences in three large genetic “continents”, which are changing faster than the oceans of similarity in between. These continents are rich in metabolic genes which allow the microbes to break down the chemicals around them. And that provides a clue about why the same microbes living the same place are dividing into two groups. It’s easy to imagine how one species can become two, when different populations are separated by a physical barrier, like a mountain or a river. Unable to meet or mate, their genes are free to change along independent lines. The classic example is the separate fates of the Galapagos finches, each one stuck on a different island. But populations can often split into different species even though they share the same space. They could be separated in time, never encountering each other even though their addresses are the same. They could come to speak separate languages, and split because of a failure of communication. They could develop opposing sexual preferences. Or they could specialise on different lifestyles within the same location. That final option seems to be what S.islandicus has done.Whitakerthinks that they have adopted slightly different ways of life within their shared world. Reference: Cadillo-Quiroz, Didelot, Held, Herrera, Darling, Reno, Krause & Whitaker. 2011. Patterns of Gene Flow Define Species of Thermophilic Archaea. PLoS Biology http://dx.doi.org/10.1371/journal.pbio.1001265More on speciation: New plant species arise from conflicts between immune system genesHow diversity creates itself – cascades of new species among flies and parasitic waspsGiant insect splits cavefish into distinct populationsDiscriminating butterflies show how one species could split into twoBritish birdfeeders split blackcaps into two genetically distinct groupsOne generation, new species – all-female lizard bred in a labIn African rivers, an electric Tower of Babel