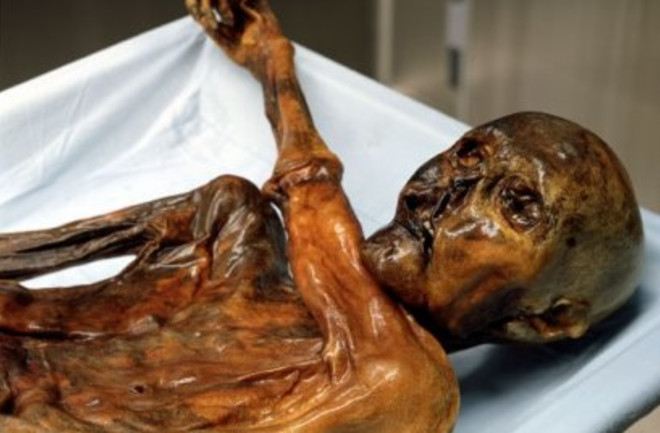 From the Iceman cometh much research: The latest study on the 5,300 year-old mummy reveals his clothing came from a variety of animals. Credit: Wikimedia Commons. Ötzi the Iceman is the gift that keeps giving. The 5,300 year-old mummy has been the focus of more than a thousand published papers since his discovery in the Italian Alps in 1991. Scientists have analyzed his wounds, his gut contents, his tattoos and even his preserved red blood cells. And today, researchers reveal the animal origins of his kit and kicks. Turns out our man Ötzi wouldn't wear just any old thing: He was rocking a haute (altitude) couture ensemble made from several different animals, which gives us insight into the functional fashion mindset of alpine Neolithic cultures.

More Leather Than at a Judas Priest Concert

By sequencing mitochondrial DNA extracted from nine fragments of the Iceman's clothing, researchers were able to determine the species of origin. His fabulous furry hat, for example, came from a brown bear, while his quiver leather was from a roe deer. Both are wild species, suggesting Ötzi, or someone in his circles, hunted. That could be another arrow (ouch) to the theory that he was a shepherd, which has come under increasing fire. However, the new research also found that Ötzi's leggings and part of his coat were made of goat leather. His shoelaces were bovine in origin, and his loincloth and parts of his coat came from sheep. Material from three domesticated animals in his wardrobe hints that it may be too soon to close the barn door on the pastoralist theory.

The Iceman traveled with (from left) a stone dagger, arrows, a roe deer leather quiver, fungus used for tinder (not that Tinder), birch fungus and birch bark. Credit: Institute for Mummies and the Iceman The study, published today in Scientific Reports, tells us about the species of animals in Ötzi's environment but also suggests his culture was choosy about materials, and selected specific hides for specific purposes, much the way modern manufacturers use different textiles for, say, yoga pants (sleek and stretchy!) and cargo shorts (uhm, for whatever they're supposed to be good for). A tip of the fedora to Ötzi, who was on-trend for his time and made the most of the resources available to him to hit the Alps in warm, breathable, natural materials in an earthy yet stylish palette.

A catwalk-ready reconstruction of Ötzi the Iceman suggests a man confident in his skin. And in his skins. Credit: South Tyrol Museum of Archaeology.

Today's study represents a big step forward for analyzing leather and other materials associated with ancient remains. Other researchers have attempted to identify the species by studying samples of keratin, a protein found in hair, with mixed results. Previous attempts based on ancient DNA extraction yielded little or no conclusive findings because the hide animal's genetic material had been destroyed in the leather-making process or contaminated by material from other animals. The success in determining species that make up Ötzi's fetching fashion means researchers have a reliable method for analyzing other prehistoric material. And that could mean the Iceman is just the tip of the spear in advancing our understanding of who wore what how back in the day.