I Punched a Shark 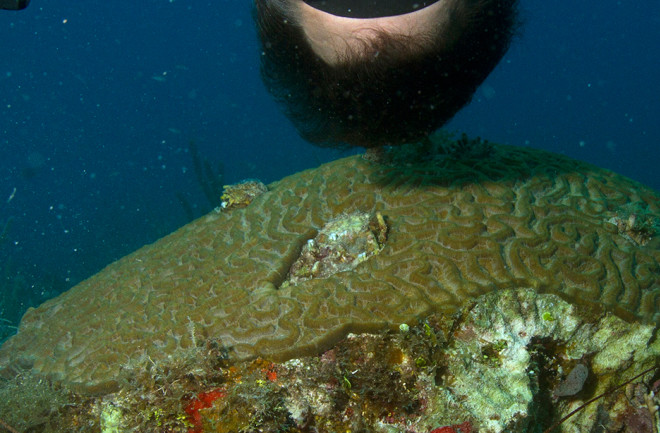 Marine biologist Ben Ruttenberg of California Polytechnic State University in San Luis Obispo scuba-dives to study fisheries and map out reefs, so he’s seen plenty of sea creatures up close. An encounter with a curious sea lion on his first dive propelled him toward marine science. But he’s had dangerous encounters, too, including one in the Galápagos while he was investigating geographical variations among damselfish.

In Galápagos, there are three common species of sharks. They’re usually not very threatening; they just cruise around. In the early 2000s, some colleagues and I were in about 25 feet of water, counting juvenile fish on the reef. I looked up, and there was a very large shark directly in front of me, and it was heading right for me.

A few things went through my mind. The first was, Wow, that’s a very large shark. Second, It’s coming right for me; that’s very unusual here. And third, I do not recognize this. It was not one of the three common species. It was bigger than most of the things I had seen down there. I’ve never heard of anything where the species has headed straight for a person.

Sharks have a lot of sensory organs on the ventral side of their snout, and I had read that if you grab them there, they are very sensitive and they stop doing whatever they’re doing. So as the shark swam up to me, I essentially punched it with the palm of my hand, underneath its snout.

Then the shark and I sat there. It felt like two or three weeks that we hung out. And then it flicked its tail and vanished. The entire thing happened in less than five seconds. We called the boat to come get us. I’ve never swum so fast.

I later looked through all the guidebooks to figure out what kind of shark I had seen. All the shark photos are taken from the side because that’s how people see them — they don’t usually get the front view of the shark. But I’m 99 percent certain that what I saw was a bull shark, which is one of the most aggressive shark species in the world.

Sometimes they’ll swim up and bump you. It’s partly territoriality, and it’s partly them investigating you, trying to figure out what you are. I know plenty of people who have been bumped by bull sharks, but no one who’s gotten to look at them face-to-face like that. I’m still not sure whether the shark thought I was a sea lion, or whether it was just curious.

It may have just thought I was a girl shark and it wanted to check me out.