Hydra Watch What They Eat 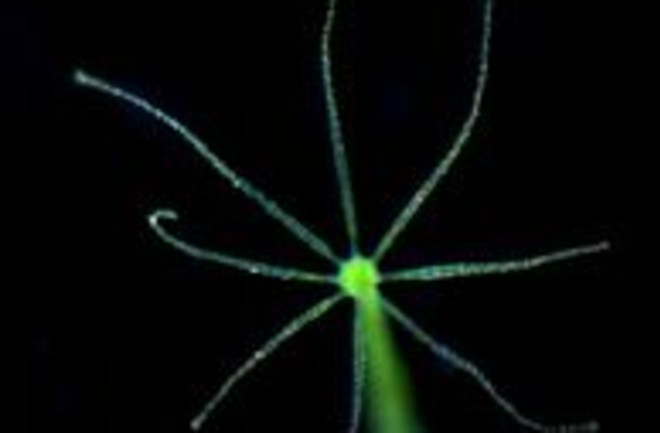 Upon first glance, hydra seem like remarkably simple creatures. The basic description of a hydra would be a tube closed at one end with tentacles surrounding a mouth on the other, made of fragile tissue that can be as slim as two cells thick. No gills, no heart, no brain, no eyes – of course, it would be hard to pack all those organs into a creature a few millimeters long, and hydra certainly seem to do well enough without them. These small relatives of jellyfish are found worldwide, and are some of the only members of the phylum Cnidaria to be found in fresh water. Yet their modest body plan is misleading. Hydra have fascinated scientists for centuries, for they have a phenomenal capacity to regenerate and may even be immortal. In 1744, Swiss naturalist Abraham Trembly was one of the first to be entranced by these simple animals and reflected, “It seemed to me from the start of my observations that knowledge of the remarkable properties of the polyps could bring pleasure to the inquisitive and contribute something to the progress of natural history.” The hydra’s simple nature is also belied by their tentacles, which inject a potent neurotoxin into unsuspecting prey using extremely sophisticated cells called cnidocytes. For decades, scientists have sought to understand how these specialized attack cells are triggered. Now, evidence published in BMC Biology suggests these primitive creatures may ‘see’ more than we realized, as the firing of these prey-catching stinging cells is regulated by the same chemical pathway used in our eyes. Ever since the genome for Hydra magnipapillata was published in 2010, it was known that hydra possess the genes for opsins, the photosensitive protein family found in all animals that can see, but no one knew exactly what they do with them. Unlike other animals, hydra don’t have eyes or eye spots, or any kind of centralized visual sensory area, although they have behavioral responses to light. When David Plachetzki teamed up with Caitlin Fong and Todd Oakley’s lab at UC Santa Barbara, they found that these light-sensitive proteins were clustered on the hydra’s tentacles and around the hydra’s mouth, suggesting that they might be involved in feeding behavior.

In hydra, potent stinging cells are grouped with other neurons in what are called “battery complexes” on the hydra’s tentacles, forming one of the most intricate systems of neurons in an organism that lacks a central nervous system. Using fluorescent molecular probes, the researchers were able to show that opsins are expressed in the same locations. They also discovered that other proteins that are part of the response to light, cyclic nucleotide gated (CNG) ion channel and arrestin, are found in these battery complexes, too. In other words, the stinging arsenals are completely equipped to react to changes in light. Just because they have the parts, however, doesn’t mean they use them. So to see if the stinging cells themselves, the cnidocytes, are regulated by light, the researchers exposed hydra to LED lights of different intensities, then prodded the animals’ tentacles with gelatin-coated fishing wire as if they were being touched by potential prey. After, the team was able to count how many cnidocytes were embedded in the line as a way of measuring whether the stinging cells were triggered. They found that bright light decreased the firing of stinging cells – which makes sense, really. “Cnidocytes are expensive to make for a hydra; a significant proportion of their cellular mass is comprised by these cell types. Therefore, it is important these austere animals to discharge them in an economical manner,” explains Plachetzki. Hydra and their relatives in the phylum Cnidaria are known to feed in daily patterns, becoming especially active at dawn or dusk, so it’s logical that they would be less inclined to feed in bright light, which might be perceived as day. Of course, there is an even more straightforward explanation as to why cnidocytes fire when the lights go out – shadows. “It could be that hydra use this sensory function to detect the shadows cast by prey on feeding tentacles, just when the moment is right to strike.” The researchers were able to directly connect the opsin signaling cascade to this change in feeding behavior by introducing a blocker of opsin signaling, cis-diltiazem. In the presence of the blocker, light had no affect, confirming that opsin-based signaling is required for this light-mediated change in cnidocyte firing. Since hydra have been extensively studied for centuries, it is a bit surprising that we are only now learning how light affects their feeding. “It is strange that nobody had discovered this before,” remarked Plachetzki. “Folks have been playing around with hydra and their photobehavior for greater than 200 years, why didn’t they notice this?” But, he says, when you look at some of the older observations of these creatures, “you get the impression that others might have had this hypothesis as well, but there were until now never any data to support it.” These findings reveal one of the earliest uses of the chemical pathways that were co-opted to create vision. By learning more about these signaling cascades, we can begin to glimpse back at the very beginnings of sight, and slowly learn more about the evolutionary steps that led to our eyes. Aside from the interesting evolutionary implications, this research may also lead to more direct benefits to humans. Cnidarians, including hydra, jellies and corals, are responsible for tens of thousands of stings every year, a handful of which are fatal. The more we know about how these stinging cells are triggered, the better we can prevent these stings, or even develop a way of protecting swimmers against them.