Hunting For The Lost Dogs of the Americas 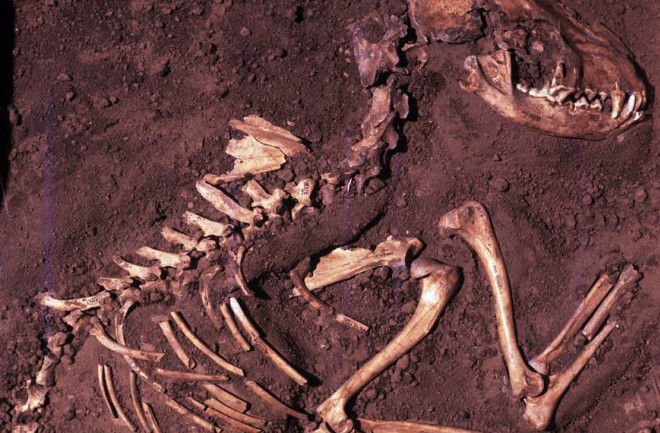 The earliest dogs of the Americas: Skeletal remains from canine burials at the Koster site in southwestern Illinois are about 10,000 years old. (Credit: Del Baston, courtesy of the Center for American Archeology) Their skeletal remains curled into sleep-like positions familiar to any dog owner, the 10,000-year-old canines found at a site in Illinois are the earliest known dogs of the Americas. Ever since they were unearthed nearly a half-century ago, the animals have been at the heart of a debate: Were the dogs of the New World descended from Eurasian wolves and then brought here by humans, or were they locally domesticated from American wolves? New genetic research answers that question — and reveals what became of them. Advances in retrieving and analyzing ancient DNA (aDNA) from dog burials in Eurasia recently helped geneticists understand how the domestication of our best friends occurred on a cellular level. Now, a team has used aDNA from Eurasia and the New World to learn where the first dogs of the Americas evolved — and how they were all but wiped out. All that remains of them, in fact, is a nasty contagious cancer. But let's back up a bit, to that question dividing researchers for decades: Were the first dogs of the Americas homegrown or Eurasian imports?

Genetic analysis a few years ago confirmed that modern domesticated dogs and gray wolves (shown here) descended from an earlier Eurasian wolf, but debate has raged over whether the first New World dogs shared that same lineage. (Credit Wikimedia Commons) Researchers sequenced the mitochondrial DNA (mDNA, or mitogenomes) of 71 ancient dogs from North America and Siberia, and compared the material with 145 mitogenomes in an existing database of doggie DNA, including modern and ancient samples. Maternally-inherited mDNA only tells half of an individual's genetic history, but when large numbers of individuals are tested, patterns emerge more clearly. And the pattern that emerged from these mitogenomes was convincing: For about the first 9,000 of the past 10,000 years, dogs in the Americas — called "pre-contact dogs" (PCDs) in the study to reflect that they pre-dated contact with Europeans and their dogs — shared the same genetic signature. In addition, the PCDs were most closely related to roughly 9,000-year-old dogs from Zhokov Island in Eastern Siberia. It gets even more interesting. Researchers used the molecular clock — a way of moving back through generations by counting the number of tiny changes in DNA that accumulate naturally — to determine that all PCDs shared a common ancestor that lived about 14,600 years ago. But wait, there's more. Using that same method, the team determined that the PCDs and ancient Zhukov dogs last shared a common ancestor about 15,600 years ago. These dates coincide with the earliest firm evidence for human migrations into the Americas from Eastern Siberia and the now-submerged land bridge of Beringia. (If you're wondering how this squares with more recent studies suggesting that humans traveled to the New World via a kelp highway around the Pacific Rim, keep in mind that the two possibilities are not contradictory. It's very possible that one or more waves of migration occurred early via the kelp highway at least 16,000 years ago, while later waves of Siberians and Beringians arrived by land as the glaciers receded and opened up new corridors of travel.) The Nuclear Option Well aware of the limits of drawing conclusions from mitogenomes alone, the researchers then tested the nuclear genomes — which are more difficult to extract but provide an individual's entire genetic history — for seven of the PCDs and compared them with previously-sequenced dogs, including modern pups from Eurasia and the Americas. Confirming the mitogenomic analysis, the PCDs were very closely related to each other in a pattern that suggested all of them descended from a single population. When compared with modern dogs, the PCDs that underwent nuclear aDNA analysis were most closely related to Arctic dogs from both the Americas (such as Alaskan malamutes) and Eurasia (Siberian huskies). Sidenote for fellow geeks of doggie DNA: The recent flood of genetic studies on dogs has indicated at least two ancient domestication events, one in Western Europe and another in East Asia, with each study based on different data and yielding slightly different results. Acknowledging that the science is advancing but not quite settled, the authors of today's paper crunched data from those previous studies with their own and found some evidence, though not conclusive, that Arctic dogs may have descended from a third ancient domestication event. However, while some details remain fuzzy, all genetic evidence now points to dogs, descended from Eurasian wolves and domesticated in Eurasia, migrating to the Americas via Beringia with their humans ("Who wants to go for a walkies? A really long walkies? Is it you? Is it YOU?!"). Lost Dogs The story of the first dogs in the Americas does not end happily for their lineage. Today's research found that the original PCD genes were virtually wiped out over the past millennium due to at least three separate events: Arctic dogs arriving from Siberia with the advent of the Thule culture, about 1,000 years ago; Europeans and their dogs arriving in large numbers beginning about 500 years ago; and the import of Eurasian sled dogs during the 19th century Alaskan gold rush. The researchers concluded that even American dogs often described as "native," such as Chihuahuas and Catahoulas, have no detectable PCD heritage. It appears the original dogs of the Americas may have left one legacy, however: canine transmissable venereal tumor (CTVT), one of a handful of contagious cancers known to science. CTVT is spread between dogs during mating. Previous research determined that the disease began in a single ancient "founder dog." Data collected in today's paper allowed the team to determine that the CTVT founder dog lived about 8,000 years ago, possibly (but not conclusively) in the Americas. The study appears today in Science.