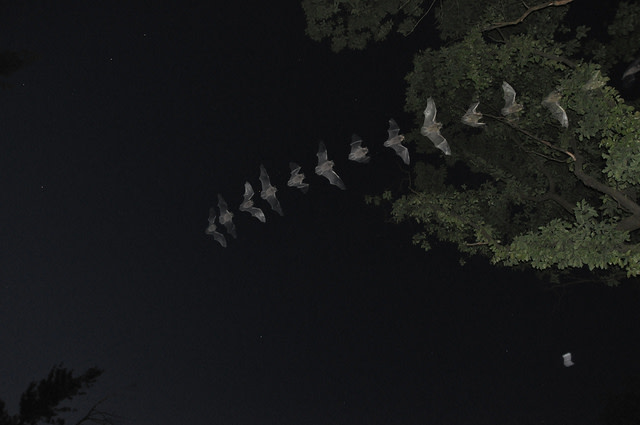 A flying insect that's suddenly swallowed by a bat probably doesn't have a lot of time to reflect on its fate. If it did, though, it might wonder how on Earth the swooping mammal managed to grab it with so little warning. The answer is that bats don't hunt just one bug at a time. While scanning the air with echoes, they manage to plan two victims ahead. Bats aren't blind, despite what you may have read on Twitter. But bats that hunt at night rely on sound, not vision. They send out very high-pitched calls as they fly. Then they collect the echoes that bounce back and use them to build a map of what's around. It works great, if you're not a bug. Calls come closer and closer together as a bat zeroes in on its prey, becoming a "terminal buzz" just before the fatal moment. In 2014, Emyo Fujioka, a researcher at Japan's Doshisha University, and his coauthors discovered that bats can snatch up bugs in surprisingly short intervals. They watched Japanese house bats (Pipistrellus abramus) hunting, and saw that kills sometimes came less than a second apart. The researchers used an array of microphones to listen in on the bats' echolocating calls. The bats weren't only focusing their beams on the nearest bug, they found—instead, bats seemed to divide their attention between their next two targets. The researchers guessed that bats were looking ahead so they could hunt more efficiently, choosing flight paths that let them nab two bugs in quick succession. So they created a mathematical model to test the idea. The model represented a bat approaching two targets by various flight paths—maybe flying straight at the first bug before turning toward the second, or taking a curved path that intersected with both targets. Then Fujioka and his coauthors gathered more data from real bats. They went into the field and watched P. abramus bats hunting at dusk. Over six days, the researchers observed almost 800 bat attacks on prey. As before, an array of microphones captured the bats' echolocating calls. Analyzing the sound recordings let the team reconstruct the bats' flight paths in 3D, and see where the animals had been focusing their sonar attention as they flew. Whenever bats caught two insects close together, the recordings showed that they'd been tracking both prey items at once. Immediately after grabbing the first bug, they began approaching the second. This fit with the mathematical model the researchers had created. "The bats pay attention to both an immediate prey and the next prey, and select a rational flight path to capture them," Fujioka says. If bats can direct their sonar beams to two targets at the same time, can they do three? Fujioka guesses that this would be too much, even for the champion echolocators. "I think that they can detect three insects at a time," he says. But when it comes to mapping a flight route, he says, "It's too difficult to plan the path to catch three insects in a row." So if you're a bug that's just seen its two closest neighbors swallowed by a bat, you might be safe—at least for another few seconds.