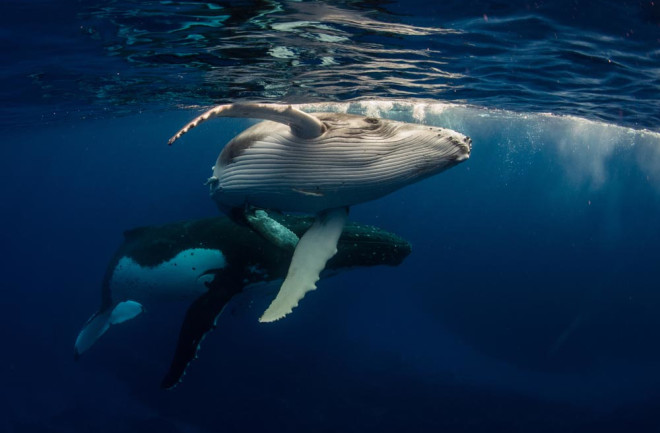 A humpback whale and calf swim together. New research suggests whale calls persist across generations. (Credit: Napong Suttivilai/shutterstock) Humpback whales are known for their songs. The long, repetitive vocal displays males make during the breeding season change over time until eventually the boys are belting out entirely new tunes. Now researchers find humpback whales — including females and young — communicate with calls that stay the same over multiple generations. The discovery is re-shaping what scientists know about how and why whales talk to each other. “We are just now beginning to understand ‘the other side’ of humpback whale communication, and it is very different from what males sing on breeding grounds,” said Michelle Fournet, an acoustic ecologist who led the new work as a Ph.D. student at Oregon State University in Corvallis.

Most of what researchers know about humpback whale communication centers on breeding songs. Perhaps as a show of dominance to other males or as a way to woo females, male whales string together repeated patterns of diverse and complex sounds. They sing their songs during the winter breeding season in warm, equatorial waters. But the animals migrate to the cold waters of southeast Alaska in summer to forage. Until about 10 years ago, scientists didn’t know what sounds humpback whales make when they are in Alaska, let alone if they differed from the males’ classic breeding songs. Since then researchers have found humpback whales produce all manner of sounds — growls, trumpets, and ahoogas, to name a few — in addition to songs. Fournet, now a researcher with the Cornell Bioacoustics Research Program in Ithaca, New York, wanted to find out whether some humpback whale calls are innate. So, together with a team of researchers that have been collectively listening to humpback whales for nearly a century, she gathered recordings of southeast Alaskan whale sounds that span nearly 40 years. After analyzing more than 100 hours of recordings, Fournet identified nearly 1,000 whale calls. Then she used spectrograms to separate the sounds into 16 types of calls — moans, whups and droplets, for example. All of the call types persisted in the humpback whale repertoire for at least three decades, the researchers reported 27 September in the journal Scientific Reports. Some were even produced across as many as three generations. “What we can begin to investigate now is why these calls persist,” Fournet said.

In a previous study, Fournet found humpback whales that forage in the North Atlantic also make many of the same kinds of calls as humpbacks in the North Pacific, even though the two populations haven’t interacted in 2 to 3 million years. “[That] is an indication that [the calls] serve some important life function,” she said. Since multiple populations of whales use the same types of calls, Fournet suspects some of the vocalizations may be how individuals identify themselves across time and space. Other kinds of calls such as those linked to hunting Pacific herring may be unique to the humpbacks in the North Pacific. “Documenting longevity of calls within Alaskan humpbacks allows us to truly begin asking questions about what these calls mean, and why whales produce them,” she said.