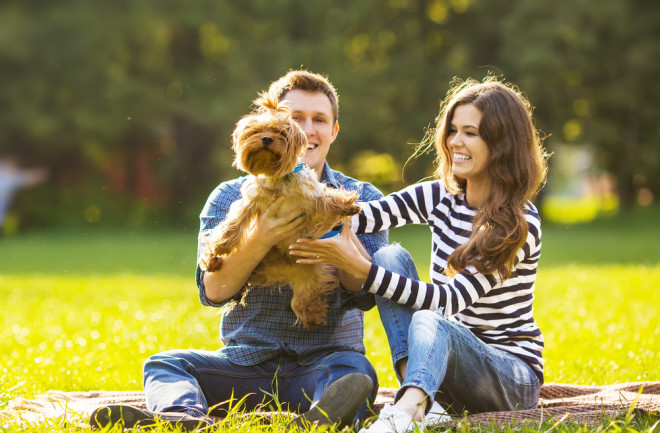 Humans display many of the same traits as animals we've domesticated. (Credit: Zadorozhna Natalia/Shutterstock) Humans have turned many wild animals into cuddlier creatures. We've domesticated wolves into dogs, boars into barnyard pigs and mountain goats into livestock that do yoga. But in addition to helpful animals and adorable pets, humans may have also domesticated an altogether different creature: Homo sapiens. The so-called self-domestication hypothesis, floated by Charles Darwin and formulated by 21st century scholars, is now popular among anthropologists. They see parallels between changes over the past 200,000 years of human evolution and those observed when wild animals became domesticates, creatures selectively bred to be docile and friendly. According to proponents, as human societies grew in size and complexity, more cooperative, less combative individuals fared better. These behavioral traits are heritable to some extent and also linked with physical traits, such as stress hormone levels, testosterone during development and skull robustness. Tamer individuals more successfully passed on their genes, and so these traits prevailed in the human lineage. Over time, our species became domesticated.

Domesticates — dogs, hogs, house cats, etc. — share some obvious similarities. Compared to their wild forbears, domesticated species are less aggressive and fearful towards humans. They often have floppy ears, curly tails, white spots on their heads, and smaller skulls, snouts and teeth. As adults, they look and act more like juveniles of the wild ancestors, and the males appear less masculine. Collectively, these behavioral and physical traits are known as the domestication syndrome. While each species may not exhibit every item on the list, enough of the traits are consistently found across domesticates that the pattern is no coincidence.

The various traits related to domestication that neural crest cells are thought to control. (Credit: Wilkins et al. 2014/Genetics) Researchers now know that breeding animals solely for tameness ultimately leads to full domestication. That’s thanks to an ongoing experiment in fox domestication, started in 1959 Soviet Russia. From fur farms in Siberia, researchers chose the least aggressive and fearful silver foxes to sire offspring. By the sixth generation foxes dubbed the “behavioral elite” emerged, who eagerly sought contact with humans by whining, whimpering and tail wagging like dogs. Over time physical changes also appeared, including white spots, floppy ears and curly tails. Sixty years later, the domesticated foxes are living proof of the domestication syndrome. It’s also now understood that domesticates’ tameness results from smaller adrenal glands, which release less stress hormones. This physiology allows the creatures to stay cool in situations where wild animals would enter a “fight-or-flight” state. A 2014 Genetics paper offered an explanation for how such disparate traits — from heads to adrenal glands to tails — could have the same underlying cause. The scientists observe that the affected features are influenced by or derive from neural crest cells, a specific class of stem cells. In developing vertebrate embryos, these cells form along the back edge of the neural tube (precursor to the brain and spine). They eventually migrate throughout the body, ultimately becoming many types of tissues, including parts of the skull, adrenal glands, teeth and the pigment cells affecting fur. In domesticates, these tissues seem underdeveloped or smaller than their wild counterparts. A deficit in neural crest cells could explain this difference, i.e. the domestication syndrome.

As biologists gain understanding of the domestication process, proving Homo sapiens underwent the transformation is another challenge — especially since our hypothetical wild ancestors are now extinct. Researchers can at least make comparisons with our closest living relative, chimpanzees. In natural settings and experiments, people are far more prosocial. Chimps are reluctant to cooperate, quick to lose their tempers and prone to aggressive outbursts. Humans, in contrast, routinely communicate and cooperate with strangers. Even infants will use gestures to help others solve a task, such as finding a hidden object.

A cast of a skull found in Qafzeh Cave in Israel. It's believed to have belonged to a Homo sapiens and is dated to around 100,000 years old. (Credit: Nicolas Perrault III/Wikimedia Commons) Scientists have also found evidence for self-domestication in human skeletal remains. Based on what’s happened to animal domesticates, it’s predicted that skulls should have become smaller and more feminine looking (in both sexes) with reduced brow ridges. Indeed, that’s what a 2014 Current Anthropology paper found, which measured Homo sapiens skulls from the Stone Age to recent times, about 200,000 years of human evolution. These results agree with previous studies reporting that average skull — and by proxy brain — volume in Homo sapiens has decreased by roughly 10 percent in the past 40,000 years.

The Darker Side of Domestication

So it’s thought that humans self-domesticated because aggressive individuals were gradually eliminated from society. A happy tale of “survival of the friendliest." But the culling may not have been friendly. Anthropologist Richard Wrangham has argued that ancient societies likely used capital punishment to execute individuals who acted as belligerent bullies and violated community norms. Through sanctioned, punitive killings, troublemakers were weeded out of humanity's gene poll. And despite our propensity to cooperate, humans are obviously capable of war, murder and other atrocities towards our own kind. In his 2019 book The Goodness Paradox, Wrangham attributes this to two biologically distinct forms of aggression: reactive and proactive. The former comprises impulsive responses to threats, like a bar brawl sparked by escalating insults. The latter is planned violence with a clear goal, such as premeditated murder and war. Research suggests these forms of aggression are controlled by different brain regions, hormone pathways and genes — and therefore could be dialed up or down independently by distinct evolutionary pressures. Wrangham proposes that reactive aggression has been reduced in our species via self-domestication. However, proactive aggression runs high. Evolution has shaped humans into both cooperators and killers: domesticates with a murder habit.