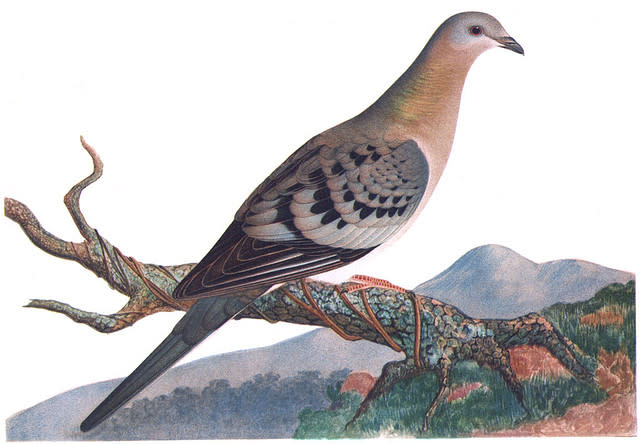 The passenger pigeon is the poster species for human-caused extinction. From a population of between three and five billion in the 1800s, the pigeon's numbers plummeted to zero in 1914, an extinction generally blamed on humans shooting the birds for sport. But as it turns out, humans were only part of the story. DNA sequencing of preserved birds has revealed that their numbers were pushed downward by natural forces, which left them more vulnerable to extinction.

Scientists studying the passenger pigeon have their work cut out for them. Not only is their research subject no longer around, but there isn't much hard data on their population numbers when they were alive. That blind spot skewed our understanding of the species' demise, researchers say in their study, published today in the Proceedings of the National Academy of Sciences. To piece together the story of how a bird once described as "darkening the skies" went extinct so quickly, researchers used a combination of old museum specimens, cutting-edge DNA analysis and ecological computer modeling. First, they sequenced DNA extracted from the toe pads of three stuffed passenger pigeons preserved in museums. By comparing this DNA to the DNA of the rock pigeon, the passenger pigeon's surviving cousin, the researchers were able to reconstruct the population picture of the defunct species.

They found that the bird's "genetically effective" population size – basically, its levels of genetic variation – was much lower than expected. Not only that, but the abundance of acorns, one of the pigeons' main food sources, fluctuated greatly over the previous 21,000 years. Taken together, those findings suggest that passenger pigeons – like other species that amass enormous populations such as the Australian plague locust – underwent rapid booms and busts. It's likely, the researchers concluded, that an ill-timed natural drop in numbers, combined with widespread shooting by people, is what snuffed out the passenger pigeon. "Our study illustrates that even species as abundant as the passenger pigeon can be vulnerable to human threats if they are subject to dramatic population fluctuations, and provides a new perspective on the greatest human-caused extinction in recorded history," the authors write in the study.