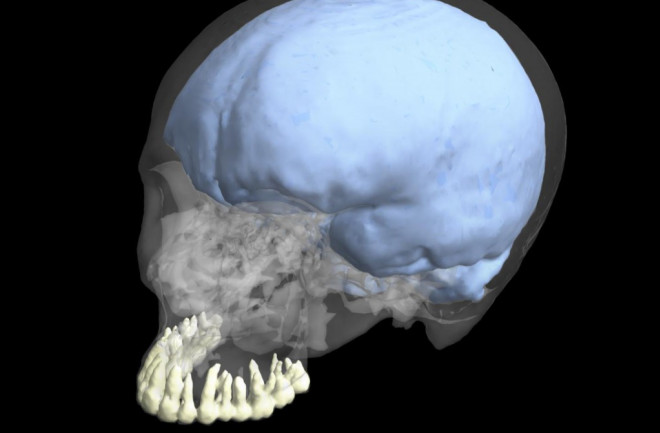 Researchers long thought the human brain (blue) got bigger as our teeth (eccru) got smaller, but a new study tells a different story. Image courtesy of: Aida Gómez-Robles. Sure, the human brain is a big deal, literally. But if you put the average human in a primate family reunion photo op that included our nearest living relatives, such as chimpanzees, bonobos and gorillas, and told all of them to smile wide for the camera, one thing would be very apparent: when it comes to teeth, man, we puny humans are total lightweights. For a long time, it's been assumed that as our brains got bigger and more bodacious, our teeth shrank proportionately. Who needs a giant set of chompers when you're such a smartypants that you can make tools to slice and dice your food and then cook it over a fire? But a new study says hang on, now — looks like our big brains and tiny teeth aren't linked after all. Published today in Proceedings of the National Academy of Sciences, the study compared brain size evolution with reduced tooth size rates in eight hominin species: two australopiths (A. africanus and A. afarensis, roughly 1.9-2.9 million years old), two members of Paranthropus (P. robustus and P. boisei, 900,000-1.2 million years old) and four examples from our own genus Homo (H. habilis, H. erectus, H. neanderthalensis, from the last 1.7 million years, and modern humans). Although conventional wisdom has pointed to co-evolution of the big human brain, little human teeth traits, the study showed the rate of brain size evolution varied from one species to the next with occasional bouts of rapid development. Brain shape evolution, which is also linked to higher cognitive function, seemed to have a generally more stable rate of change. Meanwhile, the reduction in size of teeth, particularly the molars and other chewing (rather than biting) teeth, occurred at a steadier rate that did not appear linked to brain size or shape development. The fastest "spurt" in brain size increase occurred between H. habilis and H. erectus; overall the trend towards bigger brains is, perhaps no surprise, speediest along the Homo line, leaving Australopithecus and Paranthropus in the dust. Fun fact: we used to think big brains were needed to fashion stone tools, too, but the world's oldest known stone tools, described in 2015, date from the age of australopiths, well before our brainiac genus. As we find more hominin fossils and create ever more sophisticated techniques to analyze and understand them, expect more old school ideas to go extinct. The team concluded that different environmental and behavioral influences were at work in human brain and teeth evolution rates, though speculating on what those influences might have been went beyond the scope of their research.