How We Decide, stuff happens in the brain 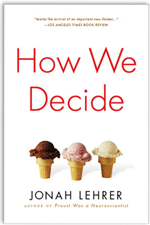 When I found out a while back that Jonah Lehrer's next book was titled How We Decide, I knew I was going to check it out. It's no coincidence that I recently reviewed Predictably Irrational, I blog because I'm interested in reducing the human animal down its basic units of organization. Due to my disciplinary focus I generally touch upon behavior genetics or the inferences of human history one can glean from evolutionary genetics. History, psychology and economics are all domains which have piqued my interest. But I'll be honest and admit that I tend to avoid neuroscience because there's a lot to memorize in terms of basic facts and I don't really have a good grasp of the field. When your network of contingent data is too thin you're really not in a position to make novel inferences, connections, or illuminate your own understanding of a topic. Luckily, in How We Decide the neuroscience is preprocessed; you don't have to grapple with the details in all their baroque complexity. I already knew about the significance of the amygdala and prefrontal cortex, how dopamine effects the way we think, and so forth. That was enough to manipulate the basic pieces on the chess board and push the narrative forward. As evidenced by the prominent blurb from Dan Ariely How We Decide is a good complement to Predictably Irrational. But there are important differences. How We Decide is the work of a writer, and its prose hangs together as a coherent narrative to a far greater degree than Predictably Irrational, which was really more a series of chapter-by-chapter verbal expositions of Ariely's scientific papers. That is fine as it goes, Predictably Irrational can be read a la carte by sampling interesting chapters. The argument in How We Decide on the other hand ties together various strands across each chapter, so that you have to follow the story along. Though there is a great deal of scientific substance, the narrative hinges upon people as specific instantiations of the abstract general concepts. Some of the illustrations require a great deal of exposition, as very few in the public would be expected to have any working knowledge of avionics. The first example is very informative, the power of implicit, reflexive, and intuitive thought is illustrated through the ability of the New England Patriots' quarterback Tom Brady to select an open wide receiver in a matter of seconds. I'm not a hardcore sports junkie, but I follow football closely enough to grasp the core insight here: Brady's genius is not in his ability to reflect and process on a conscious level, rather, it is his sharpness of reflexive instinct. A dichotomy between the encapsulated reflexive cognition and reflective conscious thought is common sense. So common that paradigms such as Freudianism rename them in an act of scientification. But in How We Decide you see just how these abstract cognitive concepts relate to the biophysical "wetware." The amygdala which serves as the seat of the emotions, the motive force behind so many of our adaptive instincts. The prefrontal cortex, flexible and forward thinking, but also relatively slow on the uptake. These regions of the bain are also tied together by the chemical "soup," in particular dopamine, which has a critical role in mediating reward. In How We Decide Jonah tunnels through multiple layers of abstraction, from economics to psychology to cognitive neuroscience, down to basic biochemistry. These disparate fields are embedded in a vivid narrative fleshed out by real human beings who serve as concrete illustrations of the complex biobehavioral dance of decision making. As story proceeds it is clear that the ultimate reality of how humans do decide must take into account the reality that our minds are a collective. The neuroscientific "meat" points us to the physical loci of the individual constituents of the collective, but moral doesn't require a deep understanding of the anatomy and physiology of the amygdala and prefrontal cortex. No, the issue isn't whether the human mind is divided within itself, it clearly is, it is how that division plays out in everyday life. Though early on Jonah shows how athletes must rely on their emotionally informed instinct, which is in many ways a distillation of previous experience and information, our instincts can also lead us astray. That was of course the topic of Predictably Irrational, and when instincts lead to error we term them "biases." There are clearly situations where one must look to one's rational faculties and overrule instinct. In How We Decide you again encounter the "pain of paying," whereby individuals tend to spend more when putting it on credit than cash. The difference here is that the phenomenon is not simply described, biochemical correlates and the neurological dynamics which undergird are also explored. At each step the concrete behaviors and biases are fleshed out through descriptive neuroscience. By the end of How We Decide you do in fact have a reasonable map of how humans decide. But there isn't a particular "X" which marks the spot, that optimal mix of emotion, instinct, reflection and rationality, that allows one to decide to maximize utility. Why? Because that is not a matter of neuroscience, but one of philosophy and cultural norms. Perhaps what we should decide would be a topic for a next book? Related: Also see Neurotopia.