How to Lose a Finger, and Other Things I Learned from Darwin's Library 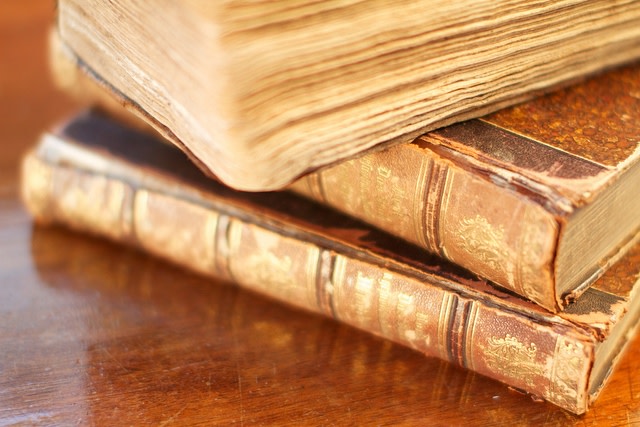 It's always a good idea to bring reading material on your trips, whether you plan to have some airport downtime or you're spending five years floating on the ocean. When Charles Darwin departed in 1831 for his trip around the world on the HMS Beagle, he had a well-stocked library. But the collection wasn't saved, and neither was the catalogue listing the titles. The team behind Darwin Online, led by John van Wyhe, has been working to recreate that library. They painstakingly worked backward from comments and citations in Darwin's notebooks, which were sometimes brief and cryptic ("Ellis horse story," read one). Now they've reconstructed the Beagle library as completely as possible. It's an online collection of 404 volumes, which all of us in the 21st century can peruse from the comfort of solid ground. The library is heavy on atlases and travel narratives and light on fiction (I hope you like Paradise Lost). Here are a few critical pieces of 19th-century knowledge I uncovered there:Where to hunt whales

"On penetrating a body of open ice encompassing the Headland, we saw a whale, and pursued it with all our boats, but without success. From hence we steered to the westward, and found the ice, which was very compact when we passed it on the 21st of the month, now loose and navigable. ... On the 28th of May, in latitude 80° 8′, longitude 0° 40′ E., we met with whales so numerous, that, in the course of a month, we succeeded in capturing twenty-four of the species. These, with two seals, two sea-horses, two bears, and one narwhale, afforded an excellent cargo*. * The whole produced upwards of 216 tons of oil."

That comes from An account of the Arctic regions, with a history and description of the northern whale-fishery, written by William Scoresby in 1820. Because William Scoresby was not the only person pulling in excellent cargos of marine mammals, they are not quite "so numerous" today. And it's not legal to commercially hunt any of them. Commercial hunting of walruses—which Scoresbey called "sea-horses"—isn't allowed either, so I won't be able to put my new knowledge to use. Cylindrical chocolate is most proper

"The Indians, in their first making of chocolate, used to roast the cacao in earthen pots; and having afterwards cleared it of the husks, and bruised it between two stones, they made it into cakes with their hands. The Spaniards improved this method. ... The paste being sufficiently ground, it is put quite hot into tin moulds, in which in congeals in a very little time. The form of these moulds is arbitrary; the cylindrical ones, holding two or three pounds, are the most proper, because the bigger the cakes are, the longer they will keep."

We're a long way from Lindt. The entry for "Chocolate" in the 1823 Encyclopedia Britannica, volume 6, describes a "kind of paste or cake" that can be imported from various countries. The authors note that "complaints are made" about spicy Spanish chocolate, which contains cloves and cinnamon as well as "musk, ambergris, &c." However, chocolate in England is "sometimes" made with sugar. One imagines that was more palatable. Time is masculine; women are containers

"Figuratively, in the English tongue, we commonly give the masculine gender to nouns which are conspicuous for the attributes of imparting or communicating, and which are by nature strong and efficacious."

This passage from Lindley Murray's 1824 An English grammar makes the case that English has gendered nouns just like the romance languages do. Masculine nouns are those which, ahem, impart something. So I guess that means feminine nouns must be—

"Those, again, are made feminine, which are conspicuous for the attributes of containing, or bringing forth"

"...or which are particularly beautiful or amiable. Upon these principles, the sun is said to be masculine; and the moon, being the receptacle of the sun's light, to be feminine. The earth is generally feminine. A ship, a country, a city, &c. are likewise made feminine, being receivers or containers. Time is always masculine, on account of its mighty efficacy."

Remember that adjectives should agree with nouns in number and gender. So mighty time is OK, as is efficacious sun. For moon, try encompassing or hysterical. Earthquakes are caused by underground fires

"Let us then...suppose, that earthquakes have their origin under ground, and we need not go far in search of a cause...The cause I mean is subterraneous fires. These fires, if a large quantity of water should be let out upon them suddenly, may produce a vapour, whose quantity and elastic force may be fully sufficient for that purpose. The principal facts, from which I would prove, that these fires are the real cause of earthquakes, are as follow."

To be fair, we didn't really figure out plate tectonics until the 1960s. So John Michell's 1760 text (catchily titled Conjectures concerning the cause, and observations upon the phaenomena of earthquakes, particularly of that great earthquake of the First of November, 1755, which proved so fatal to the City of Lisbon, and whose effects were felt as far as Africa, and more or less throughout almost all Europe) was a reasonable guess. Mysteriously fueled underground fires, he said, produce a steam that builds up until it explosively shakes the earth. I also appreciate Michell's caution in saying which parts of Europe felt the 1755 quake: almost all of it, more or less. It's good not to overstate your case. Blood red is two colors

Who knew arterial blood red was not the only kind? Before the invention of the 120-count Crayola box, color names weren't for the squeamish. Patrick Syme's 1821 book of colors was meant to be a useful reference for zoologists, botanists, and other scientists who needed paints to record what they'd observed. The book also includes swatches of each color along with an animal, vegetable, and mineral example for each. (For "Bluish Green," the examples are, "Egg of Thrush. Under Disk of Wild Rose Leaves. Beryl.") Syme's "Flesh Red" only applied to the flesh of certain humans. But then again, Crayola had a "flesh" until 1962, when it became the more universal "peach." Syme doesn't specify whether "Chocolate Red" is the kind with musk or without. The finger thing Returning to William Scoresby's Arctic whaling account, we can find a harrowing tale:

By the 3d of November, bottled beer, though wrapped in tow and placed near a good constant fire, was found to be frozen solid; and in the course of the winter, beer casks placed in the ground, at the depth of several feet, froze almost solid, and some of them burst; many of the sailors had their faces, ears, and toes frozen; iron adhered to the fingers; glasses used in drinking stuck to the mouth, and sometimes removed the skin from the lips or tongue; and, a sailor, who inadvertently used his finger for stopping a spirit bottle, in place of a cork, while removing it from the house to his tent, had his finger fast frozen in the bottle, in consequence of which, a part of it was obliged to be taken off, to prevent mortification.

Darwin's books may be old, but some of their contents—like the story of the spirit bottle and the sailor's finger—provide lessons that are timeless.