This is the eighth of eight posts on evolutionary research to celebrate Darwin's bicentennial.

In Virginia, USA, sits a facility called the American Type Culture Collection. Within its four walls lie hundreds of freezers containing a variety of frozen biological samples and among these, are 99 strains of the common cold. These 99 samples represent all the known strains of the human rhinoviruses that cause colds. And all of their genomes have just been laid bare. 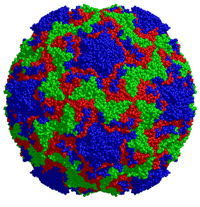 Ann Palmenberg from the University of Wisconsin and David Spiro from the J. Craig Venter Institute have cracked the genomes of all 99 strains, and used them to build a family tree that shows the relationships between them. Already, it has started to plug the holes in our understanding of this most common of infections. It reveals how different strains are related and how new strains evolve. It tells us which features are shared by all strains and which are the more unique traits that making rhinoviruses such slippery targets.

This extra knowledge may go some way to remedying the slightly baffling situation we find ourselves in, where all the vaunted progress of modern medicine has failed to produce a single approved treatment for an infection that most of us get at least twice a year.

The 99 historical strains of human rhinovirus fall into two separate species - HRV-A and HRV-B. More recently, a possible third species - HRV-C - has been identified in patients hospitalised with severe, flu-like illnesses. To build their family tree, Palmenberg and Spiro analysed the complete genomes of all 99 strains from the Virginia facility, seven samples of HRV-C, and 10 fresh samples collected from patients just a few years ago.

The genetic material of a rhinovirus comes not in the form of DNA, but as a related molecule called RNA. The entire RNA genome is translated into a long chain of amino acids called a "polyprotein", which is actually 11-12 proteins joined end-to-end. It's only by cutting this polyprotein into its constituent segments that the virus finally gets the proteins it needs to carry out an infection.

Palmenberg and Spiro found that the polyproteins of the various strains were remarkably similar. Those of any two strains were about 80% alike so large chunks of the rhinovirus genome are rather resistant to evolutionary change. The RNA molecules themselves had strong similarities too. RNA doesn't just exist as a long string - it folds up into loops, hairpins and other interesting structures depending on its sequence. The rhinovirus genome is no exception; one end is always folded into a cloverleaf shape and that's largely the same in all strains.

Things start getting interesting in the stretch of RNA just downstream of the clover. There, nearly every strain of rhinovirus had a unique sequence, and even samples of the same strain showed remarkable differences. It's likely that this wildly variable area determines how virulent a particular strain will be. The rhinovirus family tree doesn't tell us that, but other viruses support the idea. The poliovirus has an RNA genome with a similar structure that does determines how virulent itis. And in relatives of rhinoviruses, deleting this small area effectively neuters them. 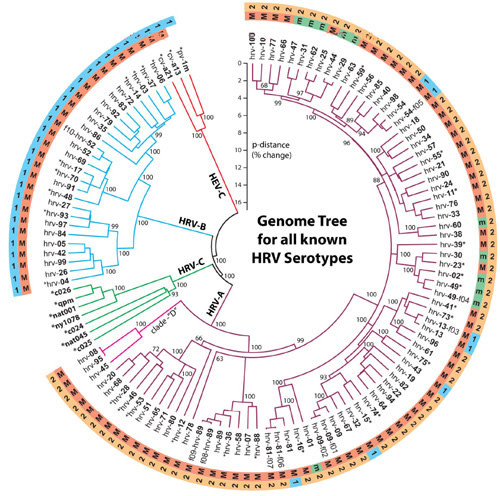 The virus tree showed that HRV-A is divided into two major groups, and that HRV-C is indeed a distinct species, albeit a closely related one. The differences between the seven known strains of HRV-C suggest that there are many more to be discovered, possibly with even greater variety than either HRV-A or HRV-B. Palmenberg and Spiro may even have identified a fourth species - HRV-D - which is an offshoot of the HRV-A line.

It's very important that this tree was built using the full genome sequences of the different strains. When Palmenberg and Spiro focused on individual proteins, as other studies have done, the results were very different. Only when they used the complete sequences did the true evolutionary relationships between the strains become apparent.

For a start, they found that 23 of the 99 strains are actually genetic cocktails, created by mixing and matching parts of different strains through a process called recombination. This swapping process is one of the major forces behind the evolution of flu viruses, but previous studies have suggested that it doesn't really play a role in rhinovirus evolution.

But that conclusion was based on a small number of viral genomes - with the full set, Palmenberg and Spiro have shown that cold viruses do indeed recombine and have done so on many occasions. For example, they showed that strain 46 is a mash-up of most of strain 53 and small parts of strain 80. Strain 54 seems to have a particular penchant for recombination and had donated parts of its genome to at least 7 other strains.

Flu viruses recombine when different strains infect the same host and it's likely that rhinoviruses do the same thing. When different strains bump into each other inside a host cell, the opportunity for genetic blending presents itself, and new strains with very different properties could emerge as a result.

The ten virus samples taken from recent patients show just how variable the common cold can be. All of them could be mapped onto one of the 99 reference strains, but some had changed substantially. In fact, the difference between some field samples and their reference counterparts was actually greater than the difference between some of the classical 99 strains. Even field samples that were taken from the same place showed striking genetic differences, despite being classified as the same strain and being collected within just a year of each other.

Implications, and why bother?

In many ways, these discoveries confirm what we knew already - cold viruses have a knack for variation that makes it very difficult to target them with drugs. But now, we have a better idea about the genetic features behind this variation and that provides an invaluable framework to build future research around.

We now have the full genomes of all the reference strains of common cold and a tree that links them together. We know that although the strains are extremely variable, all of them have some features in common. We have new targets that will inspire the design of new drugs. We have the technology to rapidly sequence the full genomes of viruses collected in the field. We're in a position to work out how specific parts of the rhinovirus genome affect the severity of infections, their incubation periods or their links to asthma.

You may, at this point, be wondering what all the fuss is about. After all, most infections by human rhinoviruses clear in less than a week, but that doesn't mean that we should underestimate them. They can provide opportunities for more serious infections to exploit, including bronchitis and pneumonia. They can worsen cases of asthma and if infants are infected early, their immune systems can react in a way that increases their odds of becoming asthmatic during adolescence.

Socially, the cold's widespread nature takes a heavy financial cost. In terms of days taken off sick, and over-the-counter medicines (all of which only alleviate symptoms rather than treat infections), rhinoviruses cost the US economy about $40 billion per year. Doctors prescribe more antibiotics to appease patients suffering from a sniffle than they do to treat actual bacterial infections, and this is probably one of the factors behind the rise of antibiotic-resistant superbugs. Don't underestimate the common cold - this is a foe worth beating. Now if someone would just sequence the full man-flu genome.