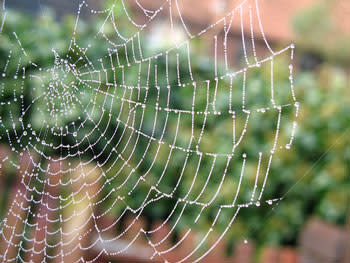 What's the News: The surprising strength of spider silk has fascinated scientists (and everyone else) for years: it's stronger than steel, yet incredibly flexible

. A new paper gives some delicious details that explain how, exactly, spider silk has such superpowers. Go With the Flow, Then Stay Strong: The strand of silk that a spider hangs from can stretch to double its usual length. But then, after that virtuosic show of elasticity, it turns rigid. The reason for that, this team found previously

, is that on the molecular level, spider silk is made of scrunched-up proteins that are pulled straight as the silk stretches. But once they've been fully unfurled, the proteins lock into a new, stiff pattern called a beta-sheet nanocrystal. For a spider, having the molecules snap to stiffness after stretching is probably analogous to a rock climber arresting a rappel by clipping the end of her rope in place. Breezy Bulkheads: In their current study using real-life spider webs and computer models, the team found that when a gentle force like a breeze is broadly applied to a spider web, the whole thing stretches and elongates. But yank or push more forcefully on one part of it, and the silk turns stiff (those beta-sheets again) and snaps. Why? Well, webs have to be flexible enough to handle winds, of course. But if the individual strands didn't turn stiff at sharp proddings and were consistently elastic instead, they would destroy whole sections of the web when they finally broke. Making each individual thread turn brittle with the application of force minimizes the damage, a strategy similar to the use of bulkheads on ships, which can be sealed off to prevent the spread of a fire or contain a leak. Stronger in Adversity: In fact, the team found, spider webs as a whole are actually stronger with some of their strands broken. No joke! Breaking a tenth of the strands in a web increased the whole thing's maximum weight bearing by 3 to 10 percent, the researchers report. References: Cranford, et al. Nonlinear material behaviour of spider silk yields robust webs. Nature, 482, 72–76 (02 February 2012) doi:10.1038/nature10739