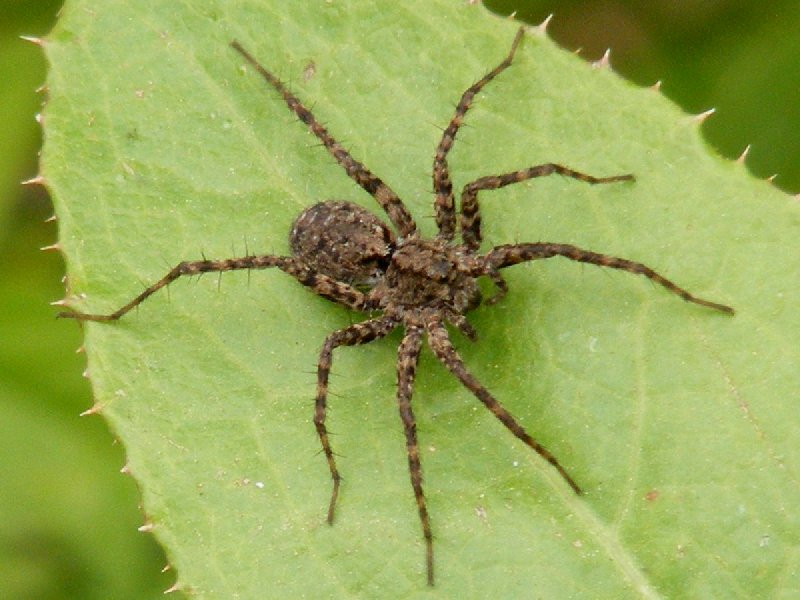 They say you can catch more flies with honey than with vinegar. But what about with lazy spiders versus lively ones? When it comes to keeping pests at bay, the personalities of the spiders hunting them are important. That's what two behavioral ecologists reported after watching bug dramas play out in a sunny hilltop alfalfa patch. Raphaël Royauté of North Dakota State University and Jonathan Pruitt of the University of Pittsburgh were studying the personalities of wolf spiders (Pardosa milvina). The spiders are common in many types of crop fields, and prey on all kinds of bugs. But individual spiders, like other animals, can have different habits or tendencies. So, the scientists asked, shouldn't those differences affect which prey the spiders catch? First they collected wild wolf spiders from Tennessee. (Rather unnervingly, the authors note that they found the spiders at night "using their eye shine.") Focusing on female spiders, they performed a simple personality test. They placed each spider on a piece of graph paper, then counted how many lines it walked across in the next three minutes. Spiders that covered a lot of ground were labeled as "active." Those that preferred to stay put were "inactive." Then the researchers brought their spiders to an alfalfa patch they'd planted. They set up 55 "mesocosms," or mesh boxes about the size of a laundry basket. Into each box, they put eight spiders. These were either eight active spiders, eight lazy ones, or four of each. As a control, 10 boxes held no spiders. There was also a selection of pests in each box that represented what the spiders might find in the wild. Specifically, the researchers had stocked the boxes with 15 blister beetles, 15 potato leafhoppers, 10 beet armyworms, 9 pea aphids, 5 sharpshooters, and 8 alfalfa weevils each. A week later, the researchers opened up the boxes to look for survivors. They found that mixed-personality spider groups killed the most pests. Boxes that held only active spiders, or only inactive spiders, had more surviving pests. Royauté explains that the difference likely comes from how spider personalities interact with the personalities of their prey. Just like the wolf spiders, certain leafhoppers or aphids or weevils may be more timid or bold than others. They might like to stay hidden, or to spend their time exploring the alfalfa. Bugs that hide in one place may be more vulnerable to active spiders, which will hunt them down eventually. But roving bugs may be more vulnerable to lazy spiders that are lying in wait for them. Between the two spider personality types, more prey bugs get eaten. The biggest surprise, Royauté says, was that boxes holding a mix of spider personality types produced widely varying results. Using only active spiders, or only inactive ones, "yielded very predictable results," he says. The bug demographics—how many of each species there were—tended to look one way after a week with active spiders, and another way after a week with lazy spiders. But with both types of spiders combined, the results were unpredictable. Royauté thinks the results could someday be useful for farmers trying to control pests in their fields. For example, maybe a certain pesticide, or a certain way of tilling a field, harms active spiders more than inactive ones. This could indirectly affect which pest species stick around afterward. Releasing spiders into a field as targeted pest control isn't very practical, Royauté says. For one thing, spiders are "highly cannibalistic," so when you raise them in big batches they tend to eat each other. And there can be dozens of spider species in an agricultural field, attacking pests at different points in their life cycles. It might be more practical, he says, for farmers to try to encourage a diversity of spider species and personality types. Diversity among predators seems to keep prey in check, as the researchers saw in the experimental boxes. Maybe keeping grass strips around a field, or growing two kinds of crops together, can promote the kind of mixed spider community that's helpful to farmers—better than honey or vinegar.