How Pitcher Plants Acquired a Taste for Meat 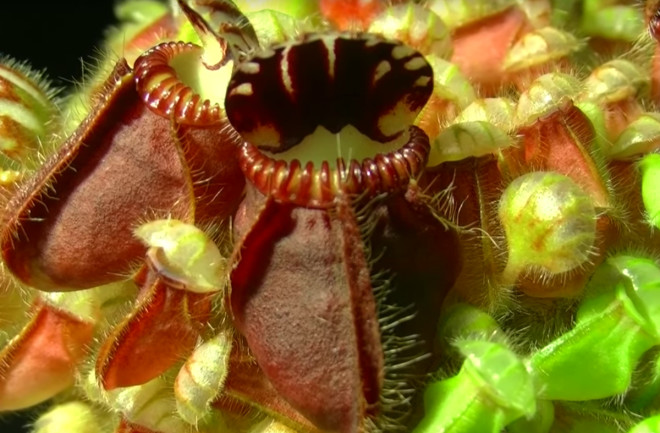 (Credit: National Institute for Basic Biology) Researchers have peered into the genome of pitcher plants to see how they developed their carnivorous appetite. Genes that once helped to regulate stress responses may have been co-opted to assist with capturing and digesting insects and other creatures. Looking at several different species an international team of researchers led by Mitsuyasu Hasebe says the same genomic regions were all altered in the same way at different times, which is an indication that the path to carnivorousness looked the same, regardless of species.

Not Just A Meat-eater

They singled out one pitcher plant species in particular, Cephalotus follicularis, for their research, because it grows both carnivorous and photosynthetic leaves. By sequencing its genome, the researchers identified the locations that determine whether a plant will grow an insect-trapping funnel or a flat leaf. In this way they homed in on the genes responsible for altering the nature of the plants' diet at some point in their history. The draft genome they assembled as part of their work, published Monday in Nature Ecology and Evolution, will be used to provide further insights into what induced the pitcher plants to undergo such a radical lifestyle change, as well as some of the unique adaptions that resulted from the transformation. Researchers found that the digestive enzymes are related to stress hormones in Cephalotus follicularis and three other species of pitcher plant. In all, they found 35 new genes associated with digestion, and traced them back to common ancestors that predate pitcher plants' reinvention as carnivores.

While the environmental changes that kicked off pitcher plants' transformation are unknown, it seems that somewhere along the way, their leaves began to curl up and to form hollow chambers ideal for trapping insects. Once trapped, a tasty bug sinks into a pool of digestive enzymes that break the body down to extract nutrients. The same genetic regions and amino acids were used by all four carnivorous plant species, which is surprising because they all developed their appetites separately. Therefore, it seems there aren't many paths available for plants to become meat-eaters.