How Mosquitoes Survive  in a Downpour

Sometimes, being tiny is a big advantage. 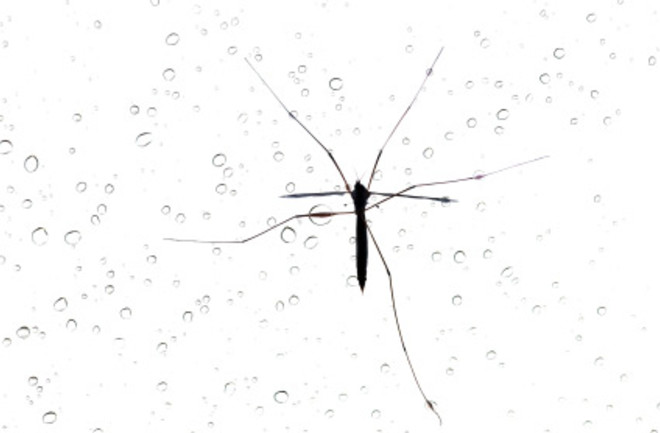 Georgia Institute of Technology mechanical engineer David Hu was sitting on the porch with his infant son when a large mosquito bite appeared on the baby’s forehead. It was pouring out, and Hu began wondering how the insect survived the impact of the drops. “A mosquito weighs only a couple milligrams, and the drops are up to 50 times heavier,” he says. “It’s like a person being hit by a bus.”

Back at the lab, Hu put the insects in cages and, using a syringe, doused them with rain-size drops. High-speed video revealed how mosquitoes manage. Rather than dodging raindrops, they fly right into them. A mosquito’s mass is so minute that little of a drop’s momentum is transferred to its body. Instead of getting flattened, the mosquito merely spins. Hu likens it to an asteroid hitting a piece of paper: The paper is so light that, rather than getting crushed, it is just pushed aside. Other insects of similar size probably withstand rain the same way. But larger ones, like wasps and bees, seek shelter during downpours. “Drops probably create a very large force when they hit something the mass of a bee,” says Hu, who plans to explore how such insects ride out the rain.