How Many Tiny Frogs Can Dance on the Tip of a Pencil? 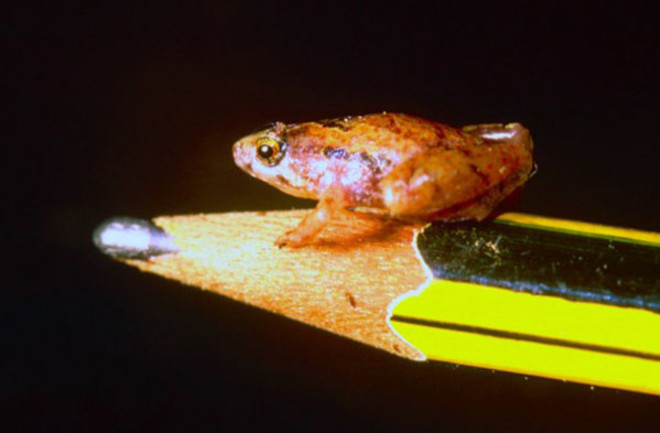 Behold its minute majesty. The micro frog's moniker is Microhyla nepenthicola. It grows to just a half-inch long or less. It lives in pitcher plants, and it's the smallest Old World frog species ever found. (The only smaller frog in the entire world is found in Cuba.)

Dr Indraneil Das of the Institute of Biodiversity and Environmental Conservation at the Universiti Malaysia Sarawak said the sub-species had originally been mis-identified in museums. "Scientists presumably thought they were juveniles of other species, but it turns out they are adults of this newly-discovered micro species," he said [Reuters].

Das says he saw the frog in century-old museum collections, meaning biologists have incorrectly identified it for a long time. The lilliputian amphibian, which is found on the island of Borneo

, draws it scientific name from the plant in which it lives.

The frogs attach their eggs to the sides of the pitcher, and the tadpoles grow in the watery liquid inside the plant [Wired.com].

Das's small prize could be just the beginning of his discoveries. He's one of the biologists tapped by Conservation International to conduct a "search for lost frogs

," an ambitious worldwide effort to locate amphibian species that haven't been sighted in over a decade. Related Content: 80beats: The “Lost Frog” Quest: Researchers Seek the World’s Rarest Amphibians

80beats: Frog Species Are Hopping Into Extinction Before They’re Even Discovered

Images: Indraneil Das / Institute of Biodiversity and Environmental Conservation (frog in #2 is newly metamorphized and measures just about one-eighth of an inch; that's why it looks tinier than the #1.)