How I became we, which became I again 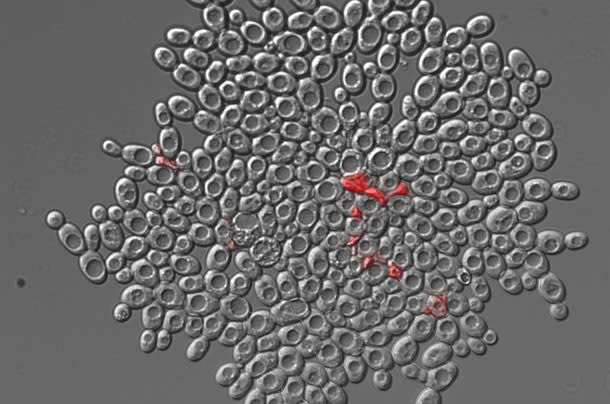 Most life on Earth exists as single cells. But the ones comprised of many cells, from the tiniest ant to the tallest tree, have had an undeniable impact on our planet. These ‘multicellular’ creatures evolved from single-celled ancestors at least 25 times throughout Earth’s history. These transitions are arguably some of the most significant in evolution, but we only have a vague understanding of how they happened. It probably went a bit like this. A single cell split into two and rather than going their separate ways, they stayed together. This happened again and again. Eventually, the groups of individual cells became individuals of grouped cells, evolving as a unit. It’s the story of how I became we, and how we became I again. In an elegant new experiment, William Ratcliff from the University of Minnesota has shown that this story could have been a surprisingly quick one. In his laboratory, he successfully nudged single-celled brewer’s yeast into multicellular clusters, within just a few months. The clumps of cells evolved as one. They even developed a primitive division of labour, with some of them deliberately dying so that the others could grow and reproduce. I’ve written about this discovery for Nature News, so head over there to read the full take. Over here, I want to emphasise that Ratcliff’s work isn’t meant to directly recap how multicellularity evolved in any particular group. It’s meant to look at the general principles that govern this transition. Richard Lenski, another evolutionary biologist famous for his work on bacteria, adds, “They’re not saying that it happened in nature the way it happened in their experiments. The point of experimental evolution is to test hypotheses and watch evolution in action, not to replicate a specific event from some point in the distant past.” Ratcliff’s work shows that this transition, from one cell to many, could have happened much more quickly than anyone expected. To set his yeast along that path, all he had to do was to let them sink. In a tube of liquid, clumps of yeast will settle faster than single cells. By picking and growing the cells that sunk quickest, Ratcliff selected for those that tend to stick together. Many single-celled microbes clump together to create multicellular entities, from predatory bacteria like Mxyococcus to slime moulds like Dictyostelium. Yeast cells sometimes do this too – they form clumps called ‘flocs’. Ratcliff says, “My original guess was that we flocculation would evolve, but that’s not what we saw.” Within 60 days, the yeast had evolved clusters of many cells, radiating out into microscopic ‘snowflakes’. Unlike flocs, these flakes weren’t clumps of unrelated cells. They were formed by genetically identical cells that grew and divided, but never separated. That’s similar to what happens in our own bodies. A single cell – a fertilised egg – grows and divides into trillions of cells that all stay together. Many other studies have shown that sticking together would have provided benefits for single cells. “We can be fairly confident that, early on, large size was beneficial”, says Ratcliff. In a cluster, single cells are better at absorbing nutrients from their environment, surviving through rough conditions, or escaping predators. But these studies only hint at the conditions that encourage cells to stay in groups. Ratcliff’s experiments speak to something subtler and more important: the transition from groups of distinct cells to true multicellular individuals. That’s what his snowflakes were. As I write in the Nature piece: The snowflakes behaved like true multicellular organisms. They had a simple life cycle with a juvenile stage, when they grew unimpeded, and an adult one, when they reached a certain size and split into a large parent flake and a smaller, daughter flake. Ratcliff could even tune these stages. If he cultivated only those snowflakes that settled faster, he ended up with larger ones that grew bigger before splitting. This confirmed that natural selection was acting on the entire flake, rather than on the individual cells within it. “They survive as a whole, or they die as a whole. Selection shifts to the multicellular level,” says Ratcliff. The snowflakes split because some of their component cells sacrifice themselves, allowing pieces to snap off. These individual cells die for the good of the whole, allowing the parent flake to continue growing and produce many offspring. This mirrors a critical division in other multicellular creatures, such as us, between two groups of cells – the soma (body) and the germline. Lenski explains the difference well: “The vast majority of cells in our bodies are soma, and those cells won't live beyond our individual mortal existence. But the germline cells produce the sperm and eggs. Through reproduction, these privileged cells are, in some sense, immortal. Their lineages can go on and on, even after we die, so long as the bodies they build from fertilized eggs survive to reproduce in each generation.” The same is true for the yeast snowflakes. The dying cells are like the soma, and the surviving ones are like the germline. [embed width="610"]http://youtu.be/3brwkdMGRtw[/embed] Reference: Ratcliff, Denison, Borrello & Travisano. 2011. Experimental evolution of multicellularity. PNAS http://dx.doi.org/10.1073/pnas.1115323109Images and video by Will Ratcliff