How Humans Are Evolving Right Now 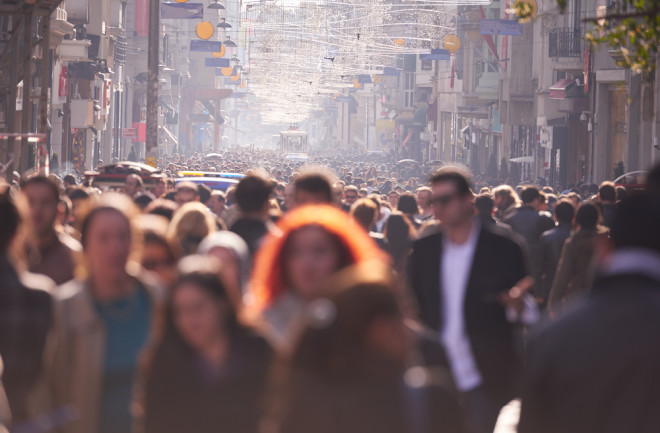 (Credit: dotshock/Shutterstock) Studies of human evolution typically look at spans of thousands of years — the length of time it often takes various mutations to take hold and become noticeable. Evolution is more dynamic than that though; it's an ongoing process with subtle variations on traits emerging while others dip into the background. Measuring the kinds of changes that are going on right now would give us valuable insights about not only our past, but also into where we're headed.

That's what researchers from Columbia University attempted with a new study looking at which genes correlate with lifespan across a group of 215,000 people in the United States and United Kingdom. They were looking for genes that showed up most often in those with long lifespans, or conversely, those which showed up in those that died young. The results offer a peek at the ongoing process of natural selection. By picking out the mutations that don't appear in older individuals, they can see which are being actively selected against and could disappear. Surprisingly, in research published Tuesday in PLOS Biology, they only found two that seemed to be significant. Mutations in one gene, APOE, which is linked to Alzheimers, and variants of another, CHRNA3, which is associated with a predisposition to smoking habits in men, both decreased sharply as the participants got older, indicating that those with the traits weren't living as long. Both cases clearly increase mortality rates, so it makes sense that they appear more frequently in younger individuals and those that die young. Along with the two single mutations, the researchers also identified some traits, based on clusters of genes rather than single alleles, that seemed to correlate with longer lifespans. Groups of genes associated with delayed puberty and having children later in life were found more often in older individuals, although the reasons are unclear. That reduced fertility might increase survival rates has been suggested before, but strong evidence in favor never emerged, and most theories were based on things like nutrition and the stresses of childbearing. The study could open the discussion anew, this time from a genetic standpoint.

Their research still leaves open the question of how natural selection is working in older individuals. Because the traits they found don't have a large effect until people are past childbearing age, it's difficult to see how they would affect reproduction rates. There are a few possibilities, although they remain in the realm of speculation. For example, there could actually be a small effect for men, as they can have children well into their seventies and eighties — although the number of septuagenarian fathers is obviously low. The so-called "grandmother hypothesis" could also factor in. It posits that in most societies, older individuals actively cared for small children while the parents were otherwise occupied. This extra attention meant that children were more likely to survive and that seniors were actually important members of early societies. So, the longer people live, the more children survive to pass on genes that help people live longer. Finally, traits that help us in old age might actually be beneficial when we're younger as well, but in ways that aren't immediately apparent. This would mean that they would actually play a role in determining who has children, we just haven't noticed yet.

There have been questions in recent years as to whether the human race will continue to evolve. After all, it seems that we compensate for our shortcomings today not by slowly acquiring genetic adaptations but with technology, meaning misfit genes no longer necessarily get weeded out. That view may be selling the powers of adaptation a bit short, however. Genetic mutations will continue to occur as long as humans procreate, bringing new traits into the mix. Some of them, like APOE and CHRNA3 will be harmful to us and they'll gradually disappear. Others will be beneficial and they'll be more likely to stay. What's more, technology has a long way to go before it solves all of humanity's ills (especially given that it often creates new ones). Slow and steady, mutation by mutation, evolution proceeds apace.