Julian Finn, Tom Tregenza and Mark Norman (the trio who first described the amazing mimic octopus) have discovered a single female bottlenose, who has developed a way of hunting cuttlefish. Not only does she successfully capture them, but she has learned how to prepare them for the perfect meal, with all the skill of a master chef. 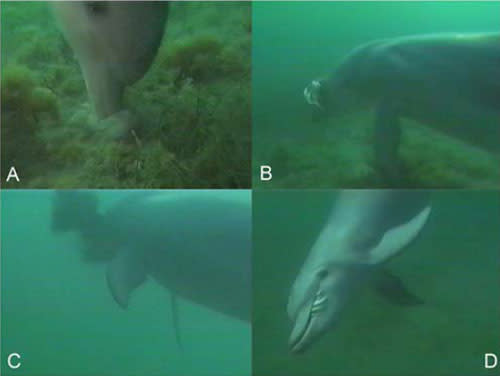 The trio studied and filmed the dolphin in question in the rocky reef of Spencer Gulf, South Australia. Between May and August, the reef is home to massive swarms of giant cuttlefish, which gather there in large numbers to breed. Following the cuttlefish were pods of bottlenose dolphins, foraging in groups of 15 or so. And following the dolphins were Finn, Tregenza and Norman. In 2003 and 2007, they filmed one individual (who they identified by scars on her head) catching and handling 7 different cuttlefish. 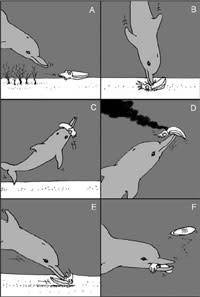 Its technique was always the same. First, she flushed the cuttlefish out from its hiding place among the dense brown algae. Once it was exposed among open sand, she dived downwards and pinned it to the floor with her beak. With a powerful beat of her tail and a twist of her body, she jabbed downwards with a sharp thrust that killed the cuttlefish instantly. The thrust breaks the cuttlebone, a hard structure inside the cuttlefish's body; it snaps so violently that nearby divers can clearly hear the click.

Having killed her prey, the dolphin still had to prepare it. Cuttlefish ink mostly consists of a pigment called melanin that can block digestion in the stomach and the ability to detect certain chemicals. So getting rid of the ink would make the meal both tastier and easier to digest, and the dolphin did that by lifting the dead cuttlefish and repeatedly beating it with her snout. Every pummel sent clouds of ink shooting from the carcass.

When that stopped, the dolphin allowed the cuttlefish back to the sand, where she raked its back along the ocean floor. That flayed the skin off its back and released the broken cuttlebone. The dolphin effectively deboned her prey and as the cuttlebone floated away, she finally settled down to eat her well-won catch.

While the trio have only directly witnessed this behaviour in one dolphin, it's extremely likely that others use it too. For a start, observers who have followed the dolphins from boats have seen clean cuttlebones floating to the surface in the wake of a pod.

Finn and co suggest that the mass breeding behaviour of the cuttlefish prompted the dolphins to develop strategies for exploiting this rich, seasonal banquet. Cuttlefish can normally shoot off at great speed using jet propulsion, but after breeding, individuals are weak and sluggish. That would allow even inexperienced or unskilled youngsters enough practice to learn the right techniques.

This remarkable series of behaviours are further proof, if proof were needed, for the extraordinarily flexible intelligence of these animals. They aren't just effective hunters; they also go to some lengths to prepare their food, in ways that make it more palatable and easier to swallow. Their skills are even more impressive because the techniques they use are complicated, and they pull them off without the dextrous limbs of primates.