How Birds and Honey Hunters Stick Together 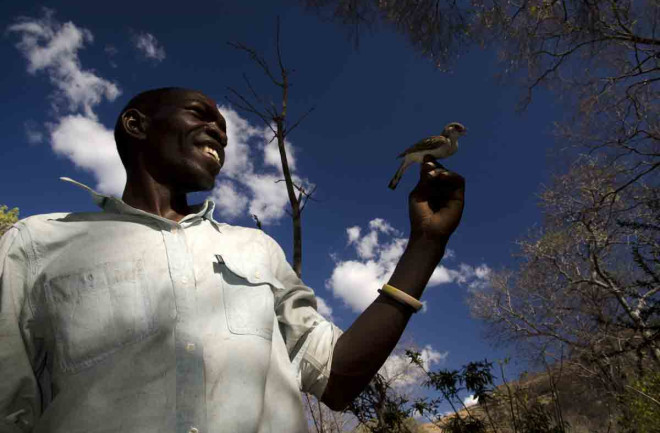 Yao honey-hunter Orlando Yassene holds a wild greater honeyguide female in the Niassa National Reserve, Mozambique. (Credit: Claire N. Spottiswoode) When members of the Yao tribe in Mozambique set off to search for wild honey, they don't go alone. To find hidden bee hives, the tribesmen enlist the help of expert guides, birds native to the African savanna appropriately named "honeyguides" (Indicator indicator). At the outset of a hunt, the Yao will call out with a distinctive vocalization consisting of a sustained trill followed by an emphatic grunt, best described as a "brrr-hm" sound. If they're lucky, one of the small, brown birds will show up and flit from tree to tree, chattering all the while, guiding the hunters toward their sweet target. And in this partnership, humans and birds both leave happy. By themselves, the birds are unable to break into the nests, so they welcome the help of a honey-seeking human to get at the wax and grubs. It pays off handsomely for the tribesmen, as well — with the birds' help, the Yao find honey on slightly more than half of their hunts, while without them, they strike liquid gold less than 20 percent of the time.

Not A One-sided Conversation

The mutualistic relationship between the birds and hunters has been documented in scientific journals since at least the 1980s, but the tradition dates back further than the tribesmen can recall in their oral history. But for the first time, scientists have shown that how humans talk to the birds is very important. A paper published Thursday in Science shows that the birds are indeed listening when the hunters call to them, and they know that the distinctive "brrr-hm" sound means that it's time to go on a honey hunt.

A female Greater Honeyguide in the Niassa National Reserve, Mozambique. (Credit: Claire N. Spottiswoode) Claire Spottiswoode, a zoologist at the University of Cambridge and lead author of the paper, trekked with the Yao tribesmen for dozens of miles through the savannah as they sought out bee nests with the help of their feathered friends. She recorded the calls they used to alert the honeyguides and monitored how often they successfully drew the birds to them and how that affected their success. She also tested a series of random vocalizations as they hunted to see if the distinctive calls, passed down to them through generations, were actually better at calling to the birds. She found that having a honeyguide is a must when looking for nests on the savannah — the hunters were over three times as successful when a bird answered their call. In addition, the birds showed up twice as often when the Yao used their "brrr-hm" calls as opposed to random noises — an indication that the calls mean "time to look for honey" to the birds.

The kinship between honey hunters and their beaked guides exists in many tribes throughout Africa. The Hadza in Tanzania also embark on honey hunts with the birds, and go about it in much the same way. Instead of a "brrr-hm", their calls are what Spottiswoode calls "a lovely melodious whistle."

Birds Learn All On Their Own

Interestingly, the birds seem to have adopted this behavior all by themselves. "They're not trained in any way at all, they're genuinely free-living, properly wild animals whose interactions with humans have probably evolved through natural selection rather than any artificial selection on our part," says Spottiswoode. Birds help humans out in other ways — falcons and hawks are used for hunting — but they are rigorously trained. The African honeyguides work with humans all of their own volition. Examples of this kind of natural relationship are quite rare in the animal kingdom, says Spottiswoode. She cites anecdotal evidence of dolphins helping fishermen to herd fish into nets, but adds that mutualistic relationships between humans and animals really don't occur very often.

How the birds acquire this knowledge also remains unclear as well. Honeyguides are brood parasites, which means they lay eggs in other birds' nests along with the parenting duties — so honeyguides aren't learning from mom and dad. "Given that both humans and honey guides have something to gain from bees’ nests … one could imagine that there would be opportunities for them to interact and the first beginnings of this interaction to arise," says Spottiswoode. The behavior could also be the result of a genetic adaptation that predisposes the birds to heed human calls, but Spottiswoode thinks this unlikely as there is a fair amount of gene flow in the population. Instead, she thinks honeyguides simply observe older members of their community and learn by example.

In the future, Spottiswoode hopes to explore how the relationship between the birds and hunters has affected the behavior of both over time. Teaming up with the birds to find sustenance has likely shaped Yao culture, and she wants to see how that relationship has evolved, and may continue to evolve, over time. Opportunities to do so may be dwindling, as a number of tribes are ditching the traditions of their ancestors for modern sources of sugar. The Niassa Reserve in Mozambique, where she conducted her study, is one of the last places to observe traditional honey hunts. "It’s a wilderness where people and wildlife still coexist, which allows astonishing human-animal relationships to not only persist but still thrive," she says. "So it would be really fantastic to fully understand this part of human ecology and evolution before it's too late and these opportunities have dwindled away.".