Honey, I Shocked the Bees

Inside the electrifying relationship between plants and insects. 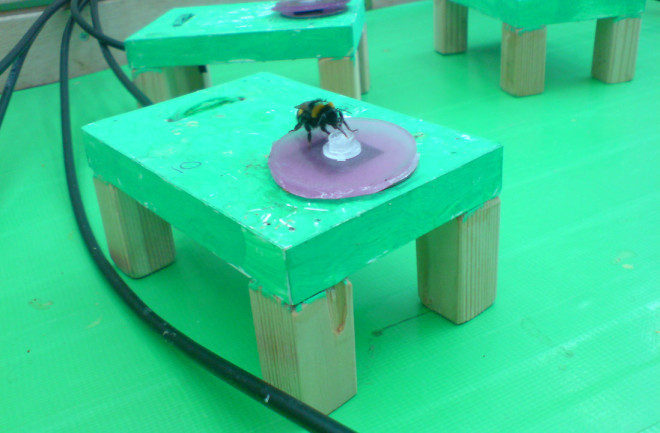 Biologists control the electric fields around fake flowers (purple disks) to test how bees use them while navigating. | Dominic Clarke

In a never-ending quest to ensure that bugs distribute their pollen, flowers strut their stuff, displaying their brightest colors and lushest scents to attract bees and other pollinators. Scientists recently discovered another shocking method flowers use to lure bumblebees: electric fields.

Biologist Daniel Robert and colleagues at the University of Bristol in England already knew that flowers usually carry a negative electrical charge, while bees tend to be positively charged. To test whether bees could make use of that difference, the researchers electrified artificial flowers. Each group of the fakes had a different kind of charge, like the unique charges around real flowers. But some of the fakes held tasty sugar and others offered a bitter quinine solution.

In this example, the natural electric field around a real flower draws tiny amounts of charged paint to the edges of the petals. | Dominic Clarke and Daniel Robert

With the electricity on, bees could more easily learn which of the faux flowers had sugar and which had the quinine solution. When Robert removed the electric charge, the bees found the sugar only by chance.

“It’s another dimension of sensory perception that bees cleverly use to exploit flowers in an efficient way,” says Lars Chittka, a biologist at Queen Mary University of London who was not part of the study. Biologists believe the differences in charge around the flowers cause the small hairs on a bee’s body to bend slightly, indicating a good flower is nearby.

“Bees can learn very well,” Robert says. “Electricity provides them with an extra bit of information that makes them a little bit more clever.”

[This article originally appeared in print as "Honey, I Shocked the Bees."]