Hominin Trackways in Greece? The Game Is Afoot 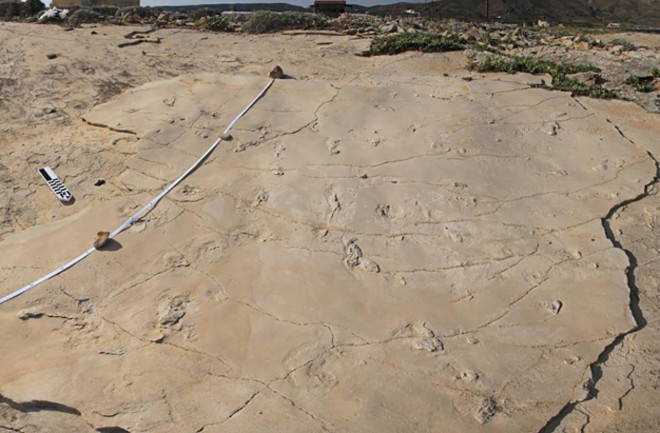 Trackways on the Greek island of Crete may have been made by a hominin millions of years before most researchers believe possible, challenging our evolution story. | Andrzej Boczarowski

Sign up for our email newsletter for the latest science news
Is this a 5.7 million-year-old hominin footprint? A controversial study says yes. | Andrzej Boczarowski

About 5.7 million years ago, on what’s now the Greek island of Crete, something went for a stroll.

Walking on two legs, its clawless feet left impressions. Instead of its first toe sticking out thumblike, as an ape’s would, this creature’s big toe was in line with the other four. This trait and other features preserved in the ancient prints are unique to hominins, primates more closely related to us than to apes or chimps.

And in an analysis published in August, researchers concluded — controversially — that these footprints at Trachilos, Crete, appear to belong to a hominin, walking where none was thought to set foot until millions of years later.

Other fossilized trackways have provided valuable insight about how our lineage evolved to walk upright, but the oldest currently accepted hominin trackway, at Laetoli in Tanzania, is 3.6 million years old. The Trachilos prints are about 2 million years older.

The Greek tracks are also thousands of miles from eastern Africa, where nearly all paleoanthropologists believe hominins — including humans — evolved. Trachilos study co-author Per Ahlberg, a paleontologist at Sweden’s Uppsala University, says critics have accused the team of trying to revive a long-debunked idea that our species evolved in Europe.

“Some people have suggested that we are driven by a Eurocentrism claim. We are making no claim whatsoever,” says Ahlberg. “It’s clear modern humans evolved in Africa.”

Instead, he says, the Trachilos prints show at least one branch of early hominins was present in Europe, and that members of our family tree were walking efficiently on two legs more than a million years earlier than we thought.

Trackways on the Greek island of Crete may have been made by a hominin millions of years before most researchers believe possible, challenging our evolution story. | Andrzej Boczarowski

“The technical side is well done. The analysis itself is complex and sophisticated — they’ve thought it through,” says William Harcourt-Smith, a paleoanthropologist at New York’s Lehman College and the American Museum of Natural History. “[But] the devil is in the details.”

For example, Harcourt-Smith notes that bears, whose hind legs do not typically make claw impressions, were present in this region at the time, but the team compared the prints with only a bear’s forelimb. The lack of claws is one of the traits cited by the authors as evidence a hominin made the prints.

“Bears do rear up and move bipedally on occasion,” Harcourt-Smith says. “I’m not saying that’s what this is, but it was a major omission not to include hind leg bear prints for comparison.

“New things get discovered all the time that challenge old thinking, and that’s wonderful, but this is a big claim. It needs to be properly comparative. It needs to be better,” he adds.

In a bizarre twist, in mid-September some of the impressions were cut from the rock and stolen. Greek authorities quickly arrested a man suspected of trying to sell the prints, which were recovered.

The site is now off-limits, under a protective cover of tarps and “a great big heap of rubble,” says co-author Matthew Bennett of Bournemouth University, one of the world’s leading experts on hominin trackways. Bennett says research will continue using the team’s high-resolution digital scans, a permanent record of the trackways: “No scientific data has been lost.”