Conservationists often object to wind farms because of the possibility that they could kill birds. But birds aren't the only flying animals to be taken out by turbines - it turns out that bats often lose their lives too, and not in quite the way you might imagine.

Recently, scientists have noticed a large number of dead bats at wind farms around the world. The turbines seem to be taking a particularly heavy toll on migratory species and while it was clear that the scale of these deaths is much larger than expected, it's less clear why they're happening at all.

Bats can fly through pitch-darkness through echolocation - a superb biological sonar system that's particularly good at detecting moving objects. With such state-of-the-art equipment, it's difficult to believe that these accomplished aeronauts could simply be blundering into the spinning blades. Now, Erin Baerwald and colleagues at the University of Calgary think that they have found the mystery killer, and it's one that is invisible to the bats' sonar - areas of low pressure.

As the blades of wind turbines spin, they reduce the pressure of the air around them. As bats fly into these low-pressure zones, the sudden change causes the air in their lungs to expand faster than the bats can exhale. The technical term is "pulmonary barotrauma". In three syllables, "their lungs burst". Areas of low pressure are essentially invisible - even if the bats' sophisticated sonar guides them through the spinning blades, they wouldn't be able to sense these danger zones until it's too late.

Baerwald performed autopsies on 188 hoary and silver-haired bats recovered from a wind farm in Alberta, Canada, to determine their cause of death. She found that 90% of them had some form of internal bleeding in their chest cavity that is consistent with death by decompression. A thorough dissection confirmed Baerwald's interpretation - the majority had damaged lungs and some had distinct air-filled bubbles that were formed by the rupture of their alveolae (the tiny sacs in the lungs through which gases are exchanged with the blood).

It's not clear what extent of pressure drop would be fatal to a flying bat, but based on the speed of modern turbines, Baerwald calculated that their tips create a fall in pressure of 5-10 kPA (kilopascals). That's more than enough to seriously harm a lot of mammals and rats cannot withstand even a drop of 4.4 kPa. 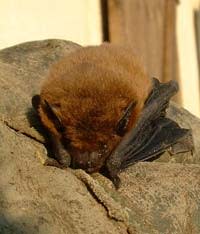 It's possible that the scale of bat fatalities has simply been underestimated in previous studies, which were primarily designed to look for dead birds. Birds are less often killed by wind turbines and Baerwald thinks that their unique breathing apparatus may make them less vulnerable to sudden pressure drops than those of bats. Bat flight is fuelled by large lungs and hearts, oxygen-rich blood and an unusually thin layer separating the gas in their lungs from the blood in their vessels.

In contrast, the lungs of birds are more rigid. Unlike the balloon-like sacs of mammals, those of birds are tube-like, compact and have exceptionally strong capillaries. In low-pressure zones that would pop the lungs of bats, those of birds barely expand. It's a case of the robin outclassing the bat. Birds do however have a relative disadvantage; they lack the sonar of bats (most species anyway), so most of their turbine-related fatalities are caused by direct hits.

As wind turbines become more common, one group of scientists predict that by 2020, they will kill anywhere from 33,000 to 110,000 bats per year. That isn't a reason to cease the development of wind technology, but it is a reason to think about ways of protecting passing bats. Situating wind farms away from migration routes is one possible solution, although these routes aren't exactly thoroughly mapped out. Shut-off times for turbines during periods of high bat activity is another, although that would slash their electricity production.

Whatever the solution, it's heartening to see that the issue is at least being taken seriously. After all Baerwald's research has an intriguing blend of funders - three conservation organisations, such as Bat Conservation International and five energy providers, including Shell Canada.