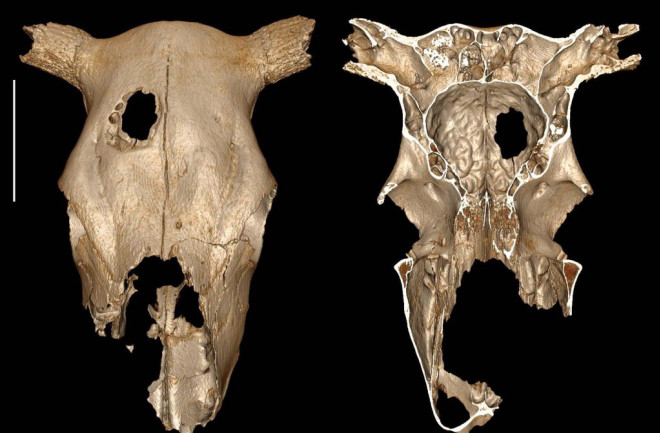 A hole produced by trepanation — an ancient form of cranial surgery — is immediately apparent in this 3D reconstruction of a cow skull found in France. (Credit Fernando Ramirez Rozzi) The average cow needs cranial surgery like it needs a hole in the head, but for one ancient bovine, it appears that's exactly what the doctor ordered. Researchers describing a hole in the skull of a Neolithic cow say it's possibly the earliest example of veterinary surgery — though it may have also been mere practice for performing the procedure on a human patient. Trepanation, or the act of intentionally making a hole in the skull, has a long history in our species (and it's still one of Hollywood's favorite ways to make us more appreciative of modern health care — link is rated R so don't say I didn't warn you). Examples of apparent trepanation around 10,000 years ago have been found in North Africa, Ukraine and Portugal. More recent cases have been discovered on every populated continent, all the way through to the present. Researchers have long debated why trepanation was so widespread in the ancient world, and what it was used for. While some cases appear to have been an attempt at relieving pain or treating injury, other examples, performed on apparently healthy people, may have been ritualistic. Cowabungled? Today, a team describes a mostly complete cow skull that's at least 5,000 years old and appears to bear the marks of an unsuccessful trepanation — or perhaps just a practice run at the real thing. The skull was found more than 30 years ago at the Neolithic site of Champ-Durand in France, where excavations in the '70s and '80s turned up plenty of animal bones, about half of them belonging to cows. The site had been previously described as an important regional trade center specializing in salt and cattle. When the skull was discovered, that big ol' hole was thought to be the result of being gored by another cow (ouch). However, a closer look by today's team revealed that trepanation is a more logical explanantion, for a few reasons. Goring, say the researchers, would have resulted in inward bone splinters and other tell-tale fracturing patterns, which are absent. There are other ways to end up with a large hole in your head, including cancer and a number of infectious diseases, but there are no signs of any pathology in the cow skull. It's also possible for bones to be punctured as carnivores gnaw on an animal post mortem (well, let's hope it would be dead at that point), but again, the skull doesn't show patterns consistent with that activity. What can be seen around the hole are numerous cut marks of varying directions and intensity, suggesting deliberate scraping away of the bone (again, ouch). The marks, say the researchers, are the same as those seen in many human skulls subjected to trepanation. While cranial surgery appears to be the most likely explanation for the hole, things did not end well for the cow. There is no sign of healed bone around the hole, which means either the animal didn't survive the procedure, or that it was already dead. If the latter, the trepanation might have been practice for doing the op on a human, or perhaps a master training an apprentice. If the trepanation was performed on a live cow in an (unsuccessful) attempt to alleviate some health issue, however, it would be the earliest known example of veterinary surgery. The study appears today in Scientific Reports.

According to the researchers, cut-marks in the cow skull (a, b, c) compared with those in a human skull (d, e) from the Neolithic are the results of the same type of trepanation technique. Bar corresponds to 1 cm. (Credit Fernando Ramirez Rozzi)