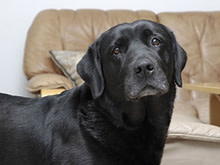 I'm not one of a kind?!? There can be only one dog cloning operation, or so says Lou Hawthorne, the CEO of BioArts, a biotech company based in California. You may have heard that a South Korean company called RNL Bio announced earlier this week that they produced four cloned copies of a Labrador retriever. The original dog, Marine, was excellent at cancer-sniffing—able to pick out breast, prostate, lung, and bladder cancer cells. But she couldn't have puppies, so her owner, canine trainer Yuji Satoh, asked RNL Bio to clone her. Two of the four new Marines have been donated to Satoh's training center and to the Seoul National University lab; the other two are on the market for a cool half-million dollars each. And RNL Bio announced plans to venture into the pet market, cloning your deceased canine if you've got the cash. All these moves have ruffled Hawthorne's feathers. In a perturbed press release today, he says that his company, BioArts, owns the sole worldwide rights to use it the dog-cloning procedure patented by Start Licensing, another American company. “RNL has no right to offer this service, and is practicing black market cloning,” Hawthorne says. “Individuals who wish to clone a beloved dog have only one legal option, and that’s our Best Friends Againprogram." This isn't the first time Korean scientists have cloned dogs, and it's not clear right now how the law will sort this out—Start Licensing has repeatedly threatened legal action, but according to the English-language South Korean newspaper JoongAng Daily, patent disputes are somewhat new to Korea. Seoul National University, the largest patent holders in South Korea, has some staff members connected to RNL Bio, but didn't have a single patent attorney as of last month, according to the same article. If courts or trade organizations don't step in, the marketplace may decide this matter. Early next month, BioArts plans to hold a series of online auctions with six-figure opening prices where people can bid for the few available spots to have BioArts clone their pet. So dig out the checkbook, dog lovers—bidding starts July 5. Image: flickr/MiikaS