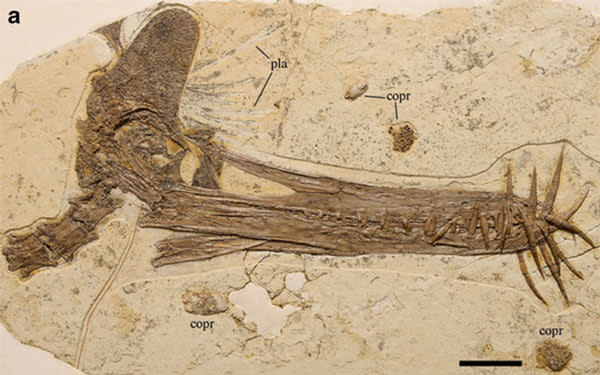 One hundred and twenty million years ago, this fearsome creature roamed the skies above China. This recently discovered skull

is the first evidence of this species of pterosaur

(a flying reptile, not a dinosaur) that scientists have found, though similar fossils have been unearthed halfway around the world in Brazil. The new species name, Guidraco venator, is a portmanteau of Chinese and Latin words together meaning "ghost dragon hunter." Those dramatic teeth have got scientists talking about how the heck it ate: did it hunt actively for the fish whose bones are in those clumps of poop ("copr" stands for "coprolite

") scattered around it, or did it scavenge? Either way, it looks like a creature that gets whatever it wants, when it wants it. [via Wired

Planet EarthPaleontologists Are Pretty Sure Spinosaurus Could Swim. But They’re Still Piecing Together What It Looked Like
Recommendations From Our Store