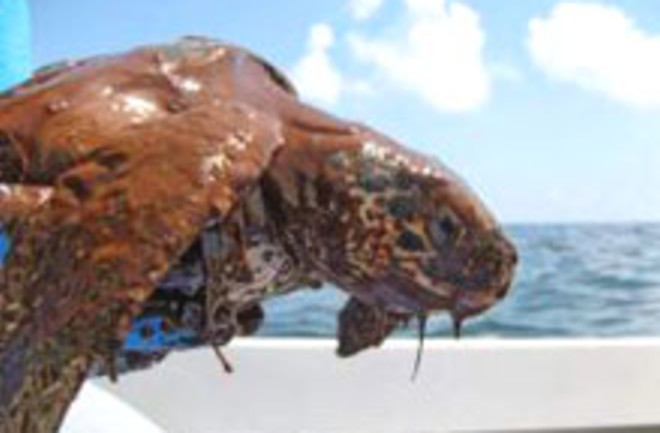 Things may be looking up, ever so slightly, for the Gulf of Mexico's endangered sea turtles. A few days ago, environmental groups announced that they were suing BP and the Coast Guard over the "controlled burns" that were intended to burn off oil slicks in the water; the environmentalists said that sea turtles were getting caught in the infernos and burned alive. This morning a judge was prepared to hear arguments on a proposed injunction, but at the last minute the parties declared that they've reached a settlement.

The agreement comes in advance of an emergency court hearing set today in New Orleans federal court, where environmentalists sought to force BP to either stop controlled burns or place rescuers on the boats to scoop federally protected sea turtles out of floating sludge patches before the corralled oil is ignited [Bloomberg].

According to Sea Turtles Restoration Project

, one of the plaintiffs in the case, BP and the Coast Guard have agreed to station a qualified biologist on every vessel involved in the burns, and to remove turtles from the burn area before setting the blaze. This is good news for the leatherbacks, loggerheads, and Kemps Ridley turtles that make their home in the Gulf. Of course, it would be better news if their home wasn't saturated with oil and periodically set on fire, but we'll take what we can get. Elsewhere in turtle news, conservationists are preparing to collect 70,000 turtle eggs from Alabama and Florida beaches. The ambitious scheme, coordinated by the U.S. Fish and Wildlife Service, is seen as the best chance of preventing a massive die-off of the threatened creatures.

"This is an extraordinary effort under extraordinary conditions, but if we can save some of the hatchlings, it will be worth it as opposed to losing all of them," said Chuck Underwood of the U.S. Fish and Wildlife Service. "We have a much higher degree of certainty that if we do nothing and we allow these turtles to emerge and go into the Gulf and into the oil ... that we could in fact lose most of them, if not all of them," he added. "There's a chance of losing a whole generation." [AP]

In the next couple of weeks, turtle experts will start the painstaking process of excavating up to 800 nests; each egg must be carefully lifted from its nest without rolling or repositioning it, to avoid disrupting the growing embryo inside. Then the eggs will be transported to a climate-controlled hanger at Kennedy Space Center on Florida's east coast where they'll stay until hatching. Finally, if all goes well, the next generation of loggerheads and other sea turtles will be set loose in the oil-free Atlantic. Related Content: 80beats: Hurricane Alex Held Up Oil Cleanup—And in Some Places, Made Things Worse

80beats: Obama’s Speech on the Oil Spill: What Do You Think of His “Battle Plan”?

80beats: Should We Just Euthanize the Gulf’s Oil-Soaked Birds?