Ground Vibrations Could Help Us Spy on Elephants 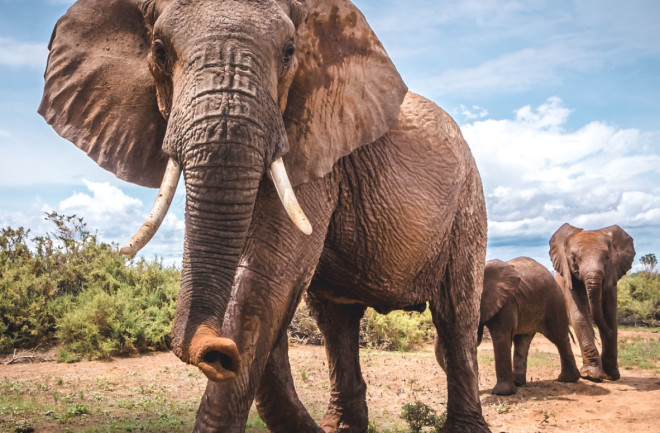 Elephants like this African elephant create vibrations with every step they take. Now, researchers are measuring those vibrations to try and determine elephant behavior from a distance. (Credit: Robbie Labanowski) What’s the first thing that comes to mind when you think of an elephant? Smart? Definitely. Social? Yup. Quiet? Maybe not. Now researchers could take advantage of the pachyderms’ sometimes-noisy habits to help keep tabs on them. A new paper published in the journal Current Biology details how experts from the University of Oxford and the University of Bristol came up with a way to use seismic vibrations in the ground to figure out what elephants are up to. Specifically, the behaviors the team pinpointed were vocalizations called rumbles, which are too low for our ears to pick up on, and walking.

To get this information, researchers trekked out to the Samburu and Buffalo Springs National Reserves in Kenya and used instruments called geophones to record the mammals’ activity. They also took measurements of things like a car approaching and passing the geophones to account for other seismic activities that could show up in their results. After using specialized software to analyze their data, the team found that some elephant rumbles could travel nearly 4 miles through the ground — farther than the sound waves could travel through the air. And seismic waves from the footsteps of a fast walk could be picked up over 2 miles away. But these distances were hampered by certain terrain and other seismic waves coming from human activity, like cars passing nearby. Still, the results are interesting for a couple of reasons. First, experts have long suspected elephants could pick up on the activity of other elephants nearby via seismic waves. This study lends support to that theory. Perhaps more interestingly, though, is the idea that we could detect elephants from a distance and figure out what they’re doing even if we can’t see them. For instance, if geophones pick up panic running, it could signal that poachers are nearby, giving authorities a better chance to catch them. And I think we can all agree that’s about as good a reason as any for elephant spying.