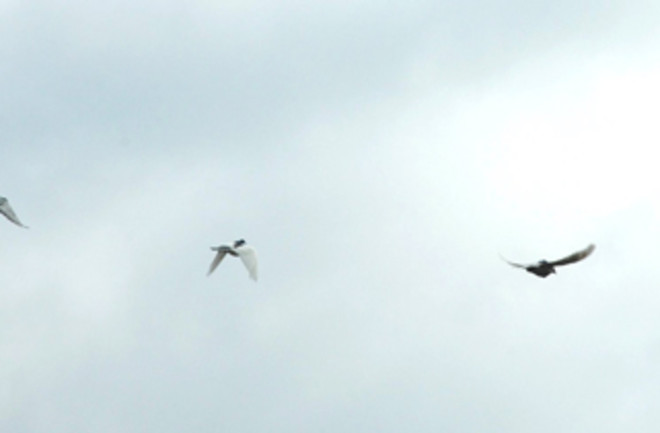 A freewheeling flock of birds is one of nature’s most endearing spectacles. The flock’s members move with uncanny coordination, changing direction in unison, splitting and reforming, and even landing as one. The intricacies of these synchronised flights are very difficult to entangle. Who is following whom? Is there even a leader and, if so, does the same bird always take up pole position? Our feeble eyes could never hope to discern the answers just by watching a flying flock. But fortunately, we have technology that can do the job for us.

, Budapest, has found that flying pigeons obey strict chains of command, even when in flight. He used state-of-the-art GPS devices to track the movements of groups of ten pigeons with exquisite sensitivity. The lightweight monitors, just 16g in weight, captured the subtleties of the pigeons’ twists and turns in mere fractions of a second. Back on the ground, Nagy analysed their recordings to show that pigeons fly according to the pecking orders they establish on the ground. The dominant bird takes the lead and the others follow his directions. Studying the collective movements of animal groups has been a difficult challenge. Many cameras can be used to film animals moving within the same block of space, but the jostling bodies often block one another from view. Mathematical models can tell us about the basic rules that groups of moving animals adhere to, but they are difficult to test in real life. But our technology has now become advanced enough to start skirting around these problems. For scientists studying birds, the key breakthrough was the creation of sensors that are light enough to be strapped to a flying bird without compromising its aerial abilities. Now, these sensors include GPS devices that can record a bird’s speed and direction every fifth of a second. Nagy attached such devices to 13 homing pigeons and watched as they flew in flocks of 7 to 11 birds.

Máté Nagy from the University of Eötvös

Nagy catalogued every instance when one pigeon changed direction only to be followed by another. By pooling together this data, he created a network of leaders and followers, showing the relationship of each bird to its peers. This colourful diagram shows one such network. Each circle represents an individual pigeon, the arrows point from a leading bird to one that follows it, and the numbers represent the time delay between the leader’s movements and those of its follower’s. The networks showed that flocking pigeons maintain a dependable hierarchy on the wing. On average, when a leading bird changed direction, its followers would follow suit after around a third of a second. Birds will consistently copy the movements of specific individuals further up the pecking order and, in turn, they are consistently copied by more junior underlings. What makes a leading pigeon? It seems that skill counts for something. Nagy released each of his birds on a solo flight, some distance from home. When they returned, he found that those who arrived home quickest were also most likely to wield leadership authority, although this link between navigation ability and seniority wasn’t quite statistically significant. Indeed, the chains of seniority within pigeon flocks are fairly flexible, changing dynamically from flight to flight. Influential birds tend to remain influential but Tamas Vicsek, who led the study, says, “There are days when the pigeon which takes the role most of the time is less active. Perhaps it did not have a good sleep! During these days some of the birds on lower levels of the hierarchy have their chance to lead.” Nagy’s data also revealed that leaders do indeed take up pole position at the front of the flock. That may seem intuitively obvious to us, but remember that pigeons have a field of vision that extends for almost a full 360 degrees. When you can easily see individuals flying behind you, the leading bird doesn’t necessarily need to be at the front, and yet it does. More surprisingly, leaders also tend to stay on the left of the flock. Nagy found that the more time that a bird spent behind a leading partner, the more likely it was to be flying on that partner’s right. There’s an obvious reason for this – like us, pigeons have highly asymmetric brains with each half wielding greater influence over certain thought processes. Their right brain, which receives signals from the left eye, controls the ability to recognise other pigeons. So if a pigeon sees one of its peers through its left eye, rather than its right, it responds more quickly or more strongly.