Should we track great apes to save them or simply leave them alone? 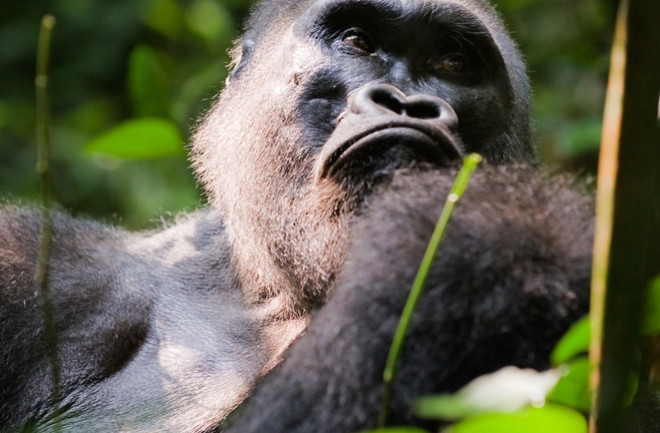 CONVENTIONAL WISDOM: It’s best for gorillas if they have little to do with humans.

For years, scientists have attached tracking devices to a variety of animals, but they have mostly steered clear of tagging great apes. In recent years, conservationists have worried that habituating gorillas, specifically, to humans is unwise since we are among the greatest threats to the species’ survival.

But last year, primatologist Peter Walsh of the University of Cambridge began a new approach to gorilla welfare: He placed a black plastic belt featuring a VHF transmitter around the ankle of Kelle, a 16-year-old male gorilla. Kelle, who lives in a cage in the Congo, will eventually be “reintroduced” to the wild.

Walsh plans to use a similar GPS-enabled version of the device to track wild western lowland gorillas. The technology can help rangers habituate gorilla groups to human company, taking well-paying tourists right up to them. Walsh is scouting potential parks for tourist reserves in Gabon.

Walsh agrees that even if his approach is best for the gorilla population, there is some risk to the individual gorilla. For instance, human-to-ape disease transmission will likely rise. But he’s quick to point out that the current approach of noninterference is not working. About 80 percent of western lowland gorillas will die in the wild in the next three generations because of pandemics, poaching and habitat destruction, according to the International Union for Conservation of Nature, which considers gorillas “critically endangered.”

Tourism might just save them. Walsh says the revenue will help improve infrastructure, spur job creation and pay taxes. This will increase government support for conservation.

“Everybody is so caught up in this Garden of Eden kind of mythology; it’s just not true,” Walsh says. “Nature has always been man-dominated, and if we don’t get a little more invasive, it’s not going to remain Eden.”

In East Africa, proximity between gorillas and humans has already helped the primates. Tourism revenue funded their preservation, helping to stabilize some of the mountain gorilla population there.

Tracking devices like Walsh’s would make it easier for rangers to follow gorilla groups, allowing them to home in on the animals’ exact locations. This could reduce the habituation time to just a year, Walsh says, because the tourists’ presence would be less disruptive, thanks to targeted (and shorter overall) visits. And, since the tourists could go straight to the gorillas, they’d be willing to pay extra, providing revenue that could add an economic incentive for governments to tackle poaching.

The greatest challenge so far has been engineering the appropriate device. Within hours, Kelle ripped off Walsh’s ankle transmitter. Still, telemetry expert and zoologist Roland Kays of the North Carolina Museum of Natural Sciences says the technology puzzle is entirely solvable if a determined scientist takes it on. And when it comes to saving these gorillas, Walsh is nothing if not determined.