Genome detectives unravel spread of stealthy bacteria in a hospital 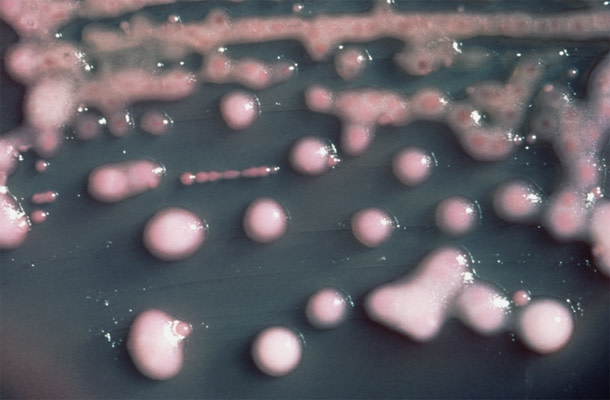 On 13 June, 2011, a woman was transferred to the National Institutes of Health Clinical Center with an infection of Klebsiella pneumoniae. This opportunistic bacterium likes to infect people whose immune systems have been previously weakened, and it does well in hospitals. In recent years, it has also evolved resistance to carbapenems – the frontline antibiotics that are usually used to treat it. These resistant strains kill more than half of the people they infect, and the new patient at the NIH hospital was carrying just such a strain. She was kept to herself, in her own room. Any doctors or visitors had to wear gowns and gloves. The only contacts she had with other patients were two brief stints in an intensive care unit. The woman eventually recovered and was released on 15 July. But by then, she had already spread her infection to at least three other patients, despite the hospital’s strict precautions. None of them knew it at the time, for K.pneumoniae can silently colonise the guts of its host without causing symptoms for long spans of time. The second patient was diagnosed with K.pneumoniae on 5 August, and every week after that, a new case popped up. The hospital took extreme measures. All the infected people were kept in a separate part of the hospital, and assigned a dedicated group of staff who didn’t work on any other patients. The outbreak was contained, but not before it had spread to 18 people in total, and killed 6 of them. How did the bacteria manage to spread so effectively, despite everything that the hospital did to stem its flow? K.pneumoniae’s stealthy nature makes it nigh impossible to work out the path of transmission through normal means. Instead, Evan Snitkin from the National Human Genome Research Institute sequenced the entire genomes of bacteria taken from all the infected patients. His study is the latest in a growing number of efforts to use the power of modern genetic technology to understand the spread and evolution of diseases. By looking the genetic similarities between different samples, and matching these to the physical overlaps between the 18 patients, Snitkin’s team reconstructed the most likely path of the bacteria. They found that Patient 1 was indeed the source of the entire outbreak. But rather than a linear chain of infections, they found a more complicated web. For example, Patient 1 didn’t infect Patient 2 directly. Instead, the bacterial genomes revealed that K.pneumoniae had jumped from Patients 1 to 2, via 3 and 5. This is exactly why genetic data is important: the bacteria can hide silently for so long, that patients who were colonised weeks before might only show symptoms after more recent infections. Snitkin also found that Patient 1 had at least three genetically distinct versions of the same bacteria, each of which led to a different chain of the outbreak (see image below). The chain that started with Patient 3 involved bacteria from Patient 1’s throat. The clusters that began with Patient 8 (and ended there) and Patient 4 (and spread to 12 others) involved bacteria from Patient 1’s groin and airways. 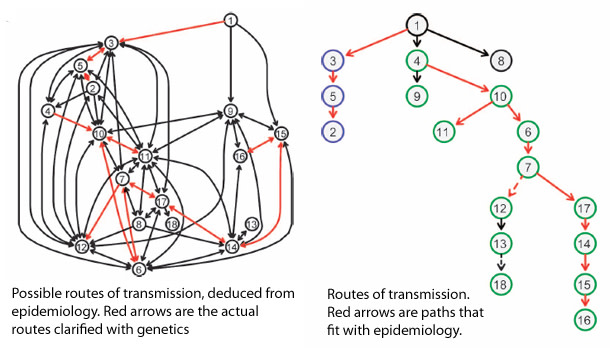 Snitkin’s study shows just how formidable Klebsiella can be, and how hospitals need to go out of their way to prevent outbreaks. The microbe’s stealthy nature means that hospital staff need to actively search for it after a colonised patient has been discharged, even if no one is currently showing symptoms. The hospital staff actually carried out some surveillance when this happened and didn’t find any traces of Klebsiella, but Snitkin suggests that such measures need to continue for a longer period of time. Klebsiella is also frustratingly hardy. Snitkin’s team isolated a strain matching that of Patient 6, from a ventilator that had already been cleaned twice with ammonia and once with bleach. And still, the bacteria survived. It just goes to show that even after the most thorough of cleans, you need to check to see if there’s anything living left. In this case, Snitkin did all his work after the outbreak was over, but with sequencing technologies becomes cheaper and faster, there’s no reason why such analyses couldn’t be done in real time. That would have many benefits. You could quickly tell if you’re dealing with multiple outbreaks involving different bacterial strains or, as in this case, a single assault from one strain. You could track the rise of antibiotic-resistance mutations as they emerge. You could also find silent carriers. Many of the links in Snitkin’s web of infection can be explained because patients briefly shared space or equipment. But others are more mysterious. Patients 1 and 4, for example, had no direct contact. Snitkin identified 5 other patients who overlapped with 1 and 4 at different times, and could have shuttled the bacteria between them. None of these potential carriers tested positive, but it’s possible that they could harbour K.pneumoniae below the level that we can detect. Patients like these could be actively monitored, or even isolated, to stop future outbreaks before they happen. Reference: Snitkin, Zelazny, Thomas, Stock, NISC Comparative Sequencing Program, Henderson, Palmore & Segre. 2012. Tracking a Hospital Outbreak of Carbapenem-Resistant Klebsiella pneumoniae with Whole-Genome Sequencing. Sci Trans Med citation tbc.